"American Hero (Part 2)" is the twenty-third chapter of the Yu-Gi-Oh! manga.

Hanasaki, dressed as Zombire faces the delinquents again, but this time his father cannot afford to pay to let him win. 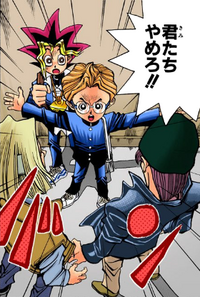 Hanasaki stands up for Yugi.

Hanasaki sees the two delinquents that he fought the previous night, picking on Yugi. Hanasaki quickly stands between them and Yugi, telling them to cut it out. One of them recognizes Hanasaki's voice and the other thinks to himself that this is Hanasaki, "the play hero from yesterday", alright. The two eye Hanasaki, who gulps and tries to assure himself that he is able to flatten these guys as Zombire. The two of them decide to leave, saying that they cannot handle that guy.

Yugi is impressed and compliments Hanasaki. Hanasaki asks Yugi to let him know if he ever has problems with bullies, and he will take care of them for Yugi.

Elsewhere the first of the delinquents asks the other why they let Hanasaki off. He was under the impression that they were going to pay Hanasaki back back for last night. The other insists that they only needed to know what he looked like and that Hanasaki is their meal ticket, so they should let him play hero for now. As they meet up with the other member of their group, he says that they will put their plan into action tonight.

At Yugi's house, Yugi assembles a Zombire garage kit, but realizes that he is out of paint. The Kame Game does not stock spray paint and everywhere else is closed, but Yugi is determined to finish the model, having put it together. He checks the time; 8 o'clock and decides to go to Hanasaki's house to borrow a can of paint. 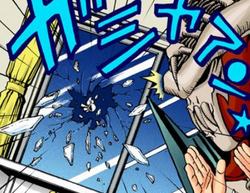 The note thrown through Hanasaki's window.

The black-haired thug arrives outside Hanasaki's house, while inside the family are eating dinner together. Hanasaki asks his father if he is going back to America tomorrow and when he will be back. His father is not sure, but tells Hanasaki that he heard a rumor about some bad guys in the park beating someone up, who were stopped by a superhero. Hanasaki thinks his father would be surprised if he knew that it was him. Hanasaki decides to keep quite about it. He says goodnight to his parents and heads to his room. He asks that they knock before entering. Once Hanasaki leaves, his mother asks his father if he thinks Hanasaki has been acting more masculine lately. He just laughs and asks if she thinks so, but thinks to himself that his son gained confidence after the previous night.

In his room, Hanasaki is wearing the Zombire costume and practicing hitting a dummy. Suddenly a stone, with the note the delinquents had written smashes through the window. The note says that they have Yugi kidnapped and gives the location. Hanasaki believes that it is the same bullies as before and refuses to let them get away with this.

Hanasaki leaves his house through the window. One of the delinquents watches him and phones the others to say that things are going as planned.

At a yard overlooking a canal, the other two delinquents hear that Hanasaki is coming. One of them finishes spray painting a skull and crossbones on a wall and announces that it is time for stage two. The other makes a call to Hanasaki's father, saying that they are ready to play hero games again, but this time they demand ¥500,000 (About $4,100 US at the time) or they will introduce a "shocking new plot element", where the superhero gets beaten to death by the bad guys. Hanasaki's father panics as he is unable to pay that much. Hanasaki arrives at the yard, demanding to know where Yugi is. The delinquent advises Hanasaki's father to have the money quickly or his son will be in a hospital bed the next time he sees him, and hangs up.

Yugi arrives at Hanasaki's house, where he finds Hanasaki's father worrying. He shows Yugi the ransom note that he found in Hanasaki's room. 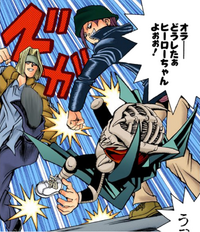 Back at the yard, Hanasaki is being beaten by the delinquents. He does not understand, since he was able to beat them no problem the previous night. The delinquents tell him that they were only acting last night, having been paid by his father. Hanasaki refuses to believe them and tries to make another attack, but gets sprayed in the face with the spray paint. As he lies on the ground, with his eyes stinging, he gets kicked again, being told that he could never be strong.

Dark Yugi arrives, with Hanasaki's father and tells the delinquents to stop. He announces that he shall be the one who is going to play with them. One of them laughs and asks Dark Yugi if he thinks he can take on the three of them, as he throws his cigarette on the ground. Dark Yugi looks down at the cigarette and spray paint. He picks up the spray paint, saying that this should be fun.

The delinquents take out their knives and go after Dark Yugi, who runs around the yard, leaving a trail of spray paint as he does so. His opponents struggle with trying to catch-up with him and try to corner him.

Hanasaki sees Dark Yugi facing the delinquents and his father tries to bring him home, while they are distracted. Hanasaki takes off the mask and says that he is not running away. If he runs away now, he will never be strong, he declares and runs back to help Yugi. 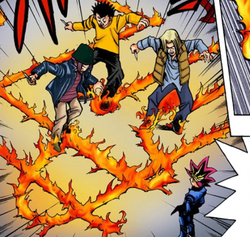 The "Maze of Fire"

The delinquents manage to corner Dark Yugi, but he diverts their attention to the ground, which is covered in a trail of spray paint. The thugs think that he is after graffiti tagging it, but Dark Yugi insists that he was not. The cigarette butt is touching off the paint and acting a fuse. The flame hits the paint, setting the whole trail on fire, which Dark Yugi calls his "Maze of Fire". The delinquents' trousers all catch fire and the three of them run for the gate and leap into the canal.

Hanasaki arrives and apologizes to Dark Yugi. His father looks at the Zombire mask and realizes that he had been wrong; the true hero's face had been hidden behind the mask; the face that got bruised defending its friend. Hanasaki says that there is no way he can be a hero, but Yugi assures him otherwise.