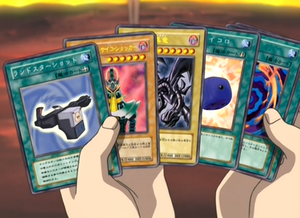 "Brigadier of Landstar" attacks directly, but Zigfried activates his face-down "Wotan's Judgment" to switch the top card of his Deck ("Valkyrie Zweite") with a Magic Card from his hand ("Nibelung's Ring") in order to negate the attack and end the Battle Phase.

Turn 4: Zigfried
Zigfried draws "Pot of Greed" and subsequently activates it to draw 2 cards (an unknown card[Notes 1] and "Erda's Guidance"). Zigfried then activates "Goddess Erda's Guidance" to discard a Magic Card,[Notes 2] take a Trap Card from his Graveyard, and Set it on his side of the field (which Joey deduces to be "Wotan's Judgment").

Turn 5: Joey
Joey draws. He then Tributes "Brigadier of Landstar" in order to Tribute Summon "Jinzo" (2400/1500) in Attack Position. The effect of "Jinzo" destroys all Trap Cards on the field, so it destroys Zigfried's Set "Wotan's Judgment". "Jinzo" attacks directly (Zigfried 4000 → 1600).

Turn 6: Zigfried
Zigfried draws "Ride of the Valkyries" and subsequently activates it.