Seto Kaiba: "Comrades! This ain't a festival and it ain't a show! It's a survival game in which Duelists stake their pride! You'll be their witnesses to them: you shall hear their death agonies and just one voice of joy! Chosen Duelists! Right now, my Kaiba Land has become a Colosseum! Glory! Defeat! You'll have to win in order to survive! Show me who'll be the survivor!"

(This Duel and many others are not shown onscreen for the sake of brevity of this mini-arc).

Turn 1: Joey
Joey draws "Swordsman of Landstar" and subsequently Normal Summons it (500/1200) in Attack Position. He then Sets two Cards.

Turn 4: Apdnarg
Apdnarg draws. On Apdnarg's Standby Phase, he activates his face-down "Non Aggression Area" to discard a card and prevent Joey from Normal Summoning or Special Summoning any Monsters during his next turn. Apdnarg then activates "Mirage of Nightmare". Now during each of Joey's Standby Phases, Apdnarg Otum can draw until he has four cards in his Hand, but each time it is Apdnarg's Standby Phase, he must randomly Discard the same number of Cards he drew via the effect of "Mirage of Nightmare". Apdnarg then Sets a Card.

Turn 6: Apdnarg
Apdnarg draws. He then activates "Ancient City". This card's effects will be revealed later in the Duel. Apdnarg then Tributes "Wandering Mummy" in order to Tribute Summon "Ancient Giant" (2200/1100) in Attack Position. While this monster is face-up on the field, Apdnarg must attack with it. If he doesn't, then he will take 300 damage during his End Phase.

Apdnarg then activates "Ancient Key" in order to Special Summon two "Stone Giants" (400/2000) in Attack Position. While these monsters are face-up on the field, Apdnarg must attack with them. If he doesn't, then he will take 500 damage for each "Stone Giant" that didn't attack during the End Phase. "Ancient Giant" attacks and destroys Joey's "Little-Winguard". The two "Stone Giants" attack directly (Joey 3000 → 2600 → 2200). Apdnarg then Sets a card. 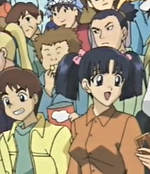