Shark Attack: Numbers Appear! is an event that occurred in Yu-Gi-Oh! Duel Links. It allows the player to unlock Reginald "Shark" Kastle as a playable character. 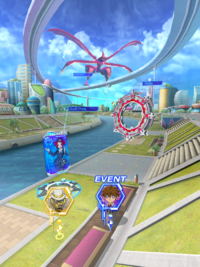 In order to challenge Possessed Shark at a certain Level at the Gate, the player needs to spend a corresponding amount of Numbers Reports, which is as follows: 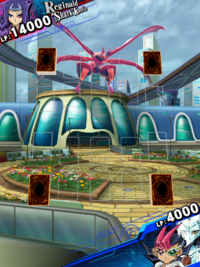 From October 30, 2020 onwards, Shark can appear in Duel World (ZEXAL) as "Raging Shark". In order to spawn Raging Shark, the player must fill a Mood Meter by Dueling in Duel World or in Ranked Duels.

Raging Shark always goes first. He uses the Skill "Give Up Already!", which forcefully ends the Duel in a draw at the start of the opponent's turn from the 10th turn onward.

Raging Shark initially has a large number of LP depending on his Level. If he is not defeated, any damage inflicted upon him during the Duel is carried over to the next Duel. (However, if the player surrenders, any damage dealt during that Duel is not carried over.) This allows the player to chip away at his Life Points over several Duels. The player does not receive any EXP, Duel Rewards, or Event Points from Duels with Raging Shark unless they defeat him. Challenging Raging Shark costs 10 Numbers Reports per Duel (for Level 100 or lower) or 20 Numbers Reports (for Level 120 or higher) per Duel.

Xyz Monsters deal five times more battle damage to Raging Shark. If one of the player's friends defeats Raging Shark, they will also decrease Raging Shark's starting LP next time he is Dueled, although he cannot be defeated by damage from a friend.

If Raging Shark is defeated, he gives a 10,000 Duel Assessment bonus that guarantees the player always receives the maximum eight rewards. The only cards he can drop are event-exclusive cards, regardless of level. In addition, a ×20 multiplier is applied to the Event Points earned from the Duel, and the chance of Rainbow Packs appearing is increased.

During the Duel, "Number 32: Shark Drake" appears in the background, and reacts to taking damage and being defeated.

The Mood Meter is filled by Dueling.

Occasionally, the player will receive a Mood Meter boost an random. If the player has this boost, their next Duel will accumulate 3 times as much as it otherwise would.

Challenges are made available throughout the course of the event. Once a Challenge is available, the player can unlock it by fulfilling its unlock condition. With the exception of the first, each Challenge is unlocked by collecting a sufficient number of Event Points and completing the previous Challenge.

When a Challenge is unlocked, a special character will spawn in Duel World (ZEXAL). The character appears as an opponent who does not provide any Duel Rewards. After defeating them, the Challenge is completed, and a cutscene plays. During the event, previously viewed cutscenes can be watched again from the Scene Album on the event page.

When the player enters Duel World for the first time during the event, they are greeted with a cutscene.

Skill: Shark's Pride (From the beginning of your 5th turn onward, play "Spear Shark" and "Hammer Shark" with 0 ATK from outside your Deck.)

Skill: Shark's Pride (From the beginning of your 5th turn onward, play "Spear Shark" and "Hammer Shark" with 0 ATK from outside your Deck.)

When Dueling against Possessed Shark or Raging Shark at Level 40 or higher, these are the only cards that can drop; at lower levels, cards from the standard pool for Legendary Duelists may also drop.

When Dueling against a Possessed Duelist, cards from the standard pool for Legendary Duelists may also drop (regardless of level).

The following missions were added on January 7, 2021.

The following mission was added on January 9, 2021.

The following missions were added on October 30, 2020.

The following mission was added on November 1, 2020.