Raid Duel - The Netherworld Cometh: Wiraqocha Rasca! is an event in Yu-Gi-Oh! Duel Links. It allows the player to unlock Dark Signer Rex Goodwin as a playable character. 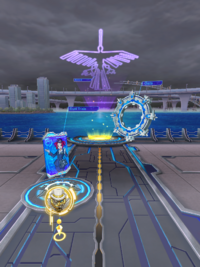 Duel World (5D's) during the event.

Earthbound Immortal Wiraqocha Rasca must first spawn in the Event page. This can be done by Dueling in the Duel World (excluding the Gate), or by Dueling in Ranked Duels, which will increase the spawn rate of the Earthbound Immortal, while also rewarding Dark Signer Vestiges. After it spawns, the player can challenge it at any time in the Event page.

In Assist Duels, the player does not need to wait for the Earthbound Immortal to spawn.

Even if the player does not succeed in defeating Earthbound Immortal Wiraqocha Rasca, it can be challenged again by using Dark Signer Vestiges, until its LP reach 0. 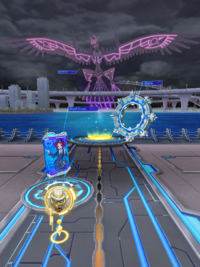 Duels against the Earthbound Immortal are conducted as Raid Duels. In this mode, Earthbound Immortal Wiraqocha Rasca will spawn with a large amount of LP, but if the player does not manage to defeat it, the damage dealt during that Duel will be carried on to the next time it is challenged. 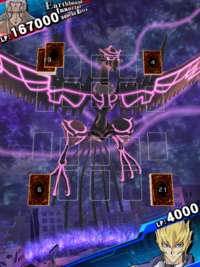 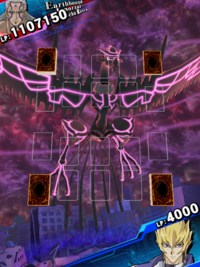 After Dueling against the Earthbound Immortal 5 times, the player can challenge it again in a Turbo Duel.

In this mode, both duelists gain Speed Counters (up to a maximum of 12) by meeting the following conditions:

The EX Skill Speed Spell - Acceleration R also becomes available. It does not replace the player's normal Skill, and can apply the following effects by removing the player's Speed Counters:

In addition, when used by the player, this Skill also plays a monster on the player's field at the start of the Duel, with the specific monster depending on the character the player is using:

Furthermore, the player is provided with the special Skill, A New Miracle!, in addition to their assigned Skill and the EX Skill. Once per Duel, from Turn 6 onward, if the player has an available Monster Zone at the start of their turn, A New Miracle! will automatically activate and create "Majestic Star Dragon" in that Monster Zone. The Skill is provided by Jack, Yusei, and Crow together, regardless of the character the player is playing as.

This story takes place after the incidents from the Destiny Decided! Dark Signer Carly Carmine event. During the event, once the player logs into Duel Links for the first time since the event started (or if already logged-in, once the player enters a Duel World Area, if they weren't at one already), they will be greeted by a cutscene.

After the end of the event, a new cutscene is played. Goodwin rages over his own defeat, questioning how he could be defeated when he had the marks of both light and darkness. Yusei says that, in the end, the Crimson Dragon chose his side and honored the memory Rex's brother, Roman Goodwin. Goodwin states that he was, once again, in the wrong path, as this is the second time the war between the Signers and Dark Signers is happening. However, this time the Dark Signers aren't real, as they were simply recreated in Duel Links. Goodwin warns Yusei that a real threat is on its way, and that he and his friends must use their bonds to fight against fate. As he disappears, he says he's leaving it up to Yusei.

After obtaining all rewards, the player will also be awarded an additional 50 R Jewels for every 1000000 points they achieve.

Every time the player defeats the Earthbound Immortal, they will be awarded with Treasure Boxes of different types.

"Oracle of the Sun" is also available in Rainbow Treasure Boxes dropped by defeating the Earthbound Immortal Level 2000.

On December 6, 2019, the following missions were added:

On December 7, 2019, the following missions were added:

Skills: Ultimate Destruction (At the beginning of your turn from turn 10 onward, forcefully end the Duel.) and Offering to the Immortals (Play 2 "Ceremonial Tokens." Then, add 1 "Earthbound Immortal" monster to your hand.)

Skills: Ultimate Destruction (At the beginning of your turn from turn 10 onward, forcefully end the Duel.) and Offering to the Immortals (Play 2 "Ceremonial Tokens." Then, add 1 "Earthbound Immortal" monster to your hand.)