Téa Gardner's Reminiscence of the Future

Téa Gardner's Reminiscence of the Future is an event that occurred in Yu-Gi-Oh! Duel Links. It allows the player to unlock Téa Gardner (DSOD) as a playable character. 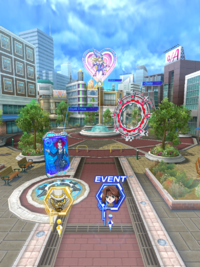 Téa Gardner (DSOD) initially appears with her Level 10 Deck in Duel World (DSOD). After defeating her, she will start to appear in Duel World (DSOD); this appearance is time-based. She can also be Dueled against at the Gate. At first, she will only be able to be challenged at Level 10. To challenge her at higher Levels (up to Level 40), the player needs to defeat her at least once at the highest available Level (e.g. she needs to be defeated at Level 10 before she can be challenged at Level 20).

In order to challenge Téa Gardner (DSOD) at a certain Level, the player needs to spend a corresponding amount of Ice Creams, which is as follows:

When a Special Episode is unlocked, a special character will spawn in Duel World (DSOD). The character appears as an opponent who does not provide any Duel Rewards. After defeating them, the episode is completed, and a cutscene plays. During the event, previously viewed cutscenes can be watched again from the Scene Album on the event page.

When the player clears Special Episode #3, Téa Gardner (DSOD) is unlocked as a playable character. Completing all episodes rewards the player with Card Sleeves: Symbol of Friendship.

During this event's second run, when the player clears Special Episode #6, the Skill "Up for the Fight" is unlocked.

In this event, the player earns Event Points by Dueling Téa Gardner (DSOD) and characters that spawn from Special Episodes. The player earns a number of Event Points equal to their Duel Result, multiplied by the Point Multiplier for that Deck level.

This story takes place after the incidents from the Raid Duel - Dimensional Disaster: Buster Gundil the Cubic Behemoth! event.

When the player enters Duel World for the first time during the event, they are greeted with a cutscene. Téa and Yugi meet each other in Duel Links. He asks her why she suddenly wanted to this world, and she responds that she wants to spend more time with him and Joey before graduating. She then wonders if he had a big reason to go there as well, but Yugi doesn't respond. Téa concludes he does have one, but she says she won't bother him with it, as she knows he'll speak about it in the right time, and only asks him to show her the world, to which he joyfully agrees.

When the player enters Duel World for the first time during the event after July 1, 2020, they are greeted with a cutscene. Joey is bragging about his skills, so Téa decides she needs to improve her skills too, so that she can defeat Joey. After this cutscene, Level 50 Téa Gardner can appear in Duel World (DSOD).

Another cutscene will be played when the player Duels against Téa Gardner (DSOD) for the first time using one of the following characters:

When the player enters Duel World for the first time after the end of the event (if they had viewed the cutscene for the start of the event), they are greeted by a cutscene. Téa has just defeated Joey in a Duel, causing Joey to request rematch; Tristan advises against it, while Bakura suggests that Joey use his Deck. The scene then cuts to Aigami and Sera. Aigami has just Dueled Kaiba. Aigami reports that Kaiba has located the Millennium Puzzle, which they both fear he will be able to reconstruct and resurrect the Pharaoh in Yugi's body, which would result in them losing their powers. Aigami plans to get rid of Yugi to prevent this, which Sera strongly disapproves of. Aigami then gives Sera a piece of the Millennium Puzzle.

This Special Episode is titled "Memories of My Friends: At the Mall".

Téa and Yugi discuss a newspaper article about the disappearance of a group of bullies who had been targeting Aigami. Bakura comments that he feels like they're being watched, but Téa teases that it is just his fanclub, which Tristan jokes is due to Bakura's accent. The scene the cuts to Aigami standing silently.

This Special Episode is titled "Memories of My Friends: Aigami".

Yugi, Joey, and Téa are walking together. Joey is happy to have his Duel Disk back, while Yugi is staring at his Deck and thinking about Atem. Joey spots Scud bullying Aigami, so confronts Scud. Scud leaves, and Aigami is grateful to Joey and his friends. Aigami confirms the trio's names and comments that they have class together. After Aigami leaves, the three of them discuss how it is strange that they both know and don't know Aigami at the same time.

This Special Episode is titled "Memories of My Friends: Our Dreams".

Yugi, Joey, Téa, Tristan, and Bakura are sitting in the schoolyard. Téa has just announced to the group that she got into the program she applied for in order to study overseas to become a dancer. Tristan comments that he has to work at his father's factory after graduation and Joey talks about his plans to become a Pro Duelist. Yugi discusses his dream of making his own games, which he hopes to share with his friends one day.

This Special Episode is titled "Memories of the Past: My Own Path".

Yugi has asked Téa to spend a Saturday with the Spirit of the Puzzle in the hopes that it might help him recover some of his memories. Téa, not sure how to help, suggests they visit the Egypt Exhibit. The Pharaoh is unsure, commenting that all he knows is that he originates from ancient Egypt. Téa comments that while she doesn't know what her future holds, her heart wants her to become a dancer, so she will attempt to follow that dream, even though she isn't certain that dancing is the right path for her. She then advises the Pharaoh to follow his own heart.

This Special Episode is titled "Memories of the Past: Night at Duelist Kingdom".

Yugi and his friends are on Duelist Kingdom. At night, Mai informs Yugi that Téa wanted to talk with him. Téa reminisces about when she and Yugi first met in elementary school. Yugi had given her a puzzle to solve, but it was too difficult so Téa broke it. Undeterred, Yugi brought her an easier puzzle to solve. Yugi feels like Téa would rather be talking to the Pharaoh and says he will bring him out, but Téa insists that she wants to talk to Yugi. Téa comments that Yugi comprises both of his personalities, which flatters Yugi.

This Special Episode is titled "Memories of the Past: The Symbol of Friendship".

Yugi feels guilty for putting his friends in danger, but Joey reassures him that he shouldn't feel that way. Joey reminds Yugi that he and Tristan were once bullies, but changed their ways when they met Yugi due to his kindness. Joey mentions that time that he took a piece of Yugi's Millennium Puzzle, and how embarrassed he was when he returned it, but that he was relieved when Yugi accepted his apology. Joey tells Yugi to never give up, and Téa agrees. Téa then has everyone put their hands together, and draws a symbol of friendship across their hands in marker, so that they remember the symbol whenever they feel alone and be reminded that their friends are always there for them.

This Special Episode is titled "Memories of the Past: Power of the Millennium Puzzle".

Shadi complements Yugi for completing all of his trials. Yami Yugi comments that he now understands the power of the Millennium Puzzle is power of friendship—that it allows multiple people to come together and be greater than the sum of their parts. Téa and Joey concur. Shadi muses that he hopes Yugi is the one who can open the door, then departs.

This Special Episode is titled "Memories of the Past: Secret Part-Time Job".

Yugi and Joey visit a restaurant, only to be shocked when their waitress is Téa. Téa's school does not allow students to have part-time jobs, so is concerned that Joey might snitch on her and get her expelled. Téa makes a threat under her breath in case they snitch on her. Téa tells the pair that she needs the job in order to save up money, so she can study overseas to become a dancer. Yugi and Joey agree to keep quiet about her job. Téa then offers to let them have their burgers for free.

Additionally, after obtaining all of the above rewards, the player obtains 50 R Jewels for every additional 600,000 points they earn.

When Dueling against Téa Gardner (DSOD) Level 40 or higher, these are the only cards that can drop; at lower levels, cards from the standard pool for Legendary Duelists may also drop.

The following missions were added on October 8, 2020.