Anubis is the main antagonist in Yu-Gi-Oh! The Movie: Pyramid of Light. In the novelization of the movie, he is revealed to be the co-creator of the Pyramid of Light, alongside Aknadin.

This Anubis is very different from the Anubis of Egyptian mythology; the latter of which was simply the Egyptian God of the dead and lacked an alignment to good or evil.

When he reveals himself in his incomplete form to Yami Yugi, Anubis was shown as a tanned, muscular man with dirty blonde hair, red eyes, and a jewel embedded in his forehead. His clothing consisted of a black cape attached to spiked padding which were held by strings, along with gray shoulder pads, black pants, and the Pyramid of Light hanging around his neck.

When Yugi had a vision after being driven unconscious by a strange force when looking at the pyramid, he saw Kaiba being grabbed by Anubis, who had a black, jackal-like head with a white muzzle, instead of his human head.

After losing the Duel to Yugi, Anubis used the power of the center jewel of the Pyramid of Light to assume a monstrous form that started off as slime, until forming an armored, jackal-like monster that could stand on its hind legs, possessed bladed wings, an axe-like blade on top of his head, and the Pyramid's jewel in the center of his chest.

In Egyptian Mythology, Anubis is the Egyptian god of embalming, possessing a jackal head and was said to have created the first Egyptian mummy. Anubis was originally the God of the Underworld and of the dead (later replaced by Osiris). This character has several similarities to the Egyptian God Anubis; his title of "Lord of the Dead" and the jackal-like head of his monstrous form, along with his ability to control mummies. However, the Egyptians never viewed Anubis as evil; in fact, he was one of their most respected and revered gods, due to his role of bringing the dead to the afterlife.

Anubis' powers are connected to the Pyramid of Light, a magical artifact with shadow powers that rival the Millennium Puzzle. With the item, its powers allow him to spiritually travel to any place he wants, transport his mummified body and his item into the Millennium Puzzle's inner world, command undead servants, influence the thoughts of people, and show others a vision of the future. When the Pyramid of Light card is in play in a Duel, Anubis is able to drain life energy from others who have taken damage during the Duel, in order to restore himself.

He is also shown to be able to create his cards out of thin air, like the Pyramid of Light card, which he put in Pegasus' Deck, and materializing his Sphinx monsters through a black slime that releases from his hands. In his vision of the future, it is revealed that the Pyramid could materialize countless monsters at his command, so he could use them to destroy all life on Earth.

Anubis' original form shows him with tan skin, a ragged black cape, and the Pyramid of Light. When in his true monster form, Anubis is able to breathe a devastating black flame from his mouth and can easily resist attacks from other monsters. In his presence, Duelists can Summon Duel Monsters cards that have real powers, including their special effects, as Joey Wheeler was able to Summon "Gilford the Lightning" and "Gearfried the Iron Knight" to battle Anubis, Maximillion Pegasus was able to Summon "Toon Dark Magician Girl" and "Blue-Eyes Toon Dragon" to stop falling debris, while Yugi and Kaiba were able to Summon "Blue-Eyes Shining Dragon", whose special effect to destroy any monster brought his end once and for all.

Anubis was an evil sorcerer who commanded evil Shadow Realm monsters. He and Aknadin created the Pyramid of Light, a failed replica of the Millennium Puzzle. Aknadin sought to have this item given to his son to take over as Pharaoh from Atem, but Anubis stole the evil item. Now, armed with the Pyramid and his monsters at his disposal, Anubis sought to use them to destroy all life on Earth. However, Pharaoh Atem stepped up to him and defeated Anubis with the Dagger of Fate. Unbeknownst to Atem, Anubis sealed his soul inside the Pyramid of Light.

A team of researchers discovered the tomb of Anubis. Yugi solving the puzzle caused both the Pharaoh and Anubis to awaken. His awakening caused the tomb to collapse.

Later, another team of scientists uncovered Anubis and the Pyramid of Light. His body and his item, as well as other items of his, were moved to the Domino City Museum. Anubis' spirit was now free to move about.

Anubis was now able to manipulate Kaiba. Kaiba and Yugi/Atem then Dueled. After Seto played Pyramid of Light, a shadow game had begun and made a super-sized Pyramid of Light. To make things worse, it removed from play all three of Yugi's Egyptian God cards. Anubis was able to infiltrate the Millennium Puzzle and began to drain the Pharaoh's life when he lost Life Points. Yugi, Joey and Tristan were sealed in the Puzzle too. Anubis was also able to create an army of undead warriors to guard him during his Resurrection.

Tea was later sucked into the Puzzle. Joey and Tristan got sick of sitting around and eventually started to fight the mummies.

After a while in the Duel, Kaiba tried to destroy the "Pyramid of Light" to gain control of the god cards, but Anubis stopped this and took over the Duel himself. Anubis Summoned "Andro Sphinx" and "Sphinx Teleia", since "Pyramid of Light" was on his field. He also puts "Theinen the Great Sphinx" face-down on the field. He destroys all of Atem's monsters, but Yugi stabs an eye inside the puzzle, which was the source of the Pyramid of Light's power, with the Dagger of Fate.

Weakened by this, Atem was able to use "Blue-Eyes Shining Dragon" to destroy the Pyramid and all of Anubis' monsters. However, "Theinen the Great Sphinx" is revealed and Anubis uses his Pyramid of Light to raise its ATK to 35,000. Atem counters by bringing back the Egyptian Gods and merges them together to destroy "Theinen" and Anubis. 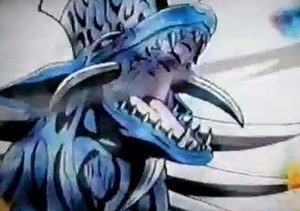 Unfortunately, a part of Anubis' soul was still in the Pyramid of Light and he turned back into his true form. Even with the help of Joey and Pegasus, they were no match for Anubis. However, Kaiba found his "Blue-Eyes Shining Dragon" card and gave it to Yugi to seal Anubis. After the dragon was Summoned, it used its power of "Shining Nova" to sacrifice itself to seal Anubis and the Pyramid of Light for good.

Anubis plays a "Sphinx" Deck, using it to take Kaiba's place in his Duel against Yugi, after Kaiba attempts to destroy the "Pyramid of Light" card. Angered by this, Anubis takes over.

His cards focused on Summoning "Theinen the Great Sphinx" and raising its ATK to extraordinary levels.