"Evil HERO" ( Ībiru Hīrō) is a sub-archetype of the "HERO" archetype used by Jaden Yuki as The Supreme King in the Yu-Gi-Oh! GX anime. It consists of Fiend monsters. They are corrupted versions of Jaden's "Elemental HERO" monsters and "Hero Kid". Most "Evil HERO" Fusion Monsters are Fusion Summoned by fusing existing "Elemental HERO" monsters with "Dark Fusion" instead of the traditional "Polymerization".

Prior to the Problem-Solving Card Text rename to recognize "HERO" as an archetype, cards that support the "HERO" archetype in the OCG instead supported "Elemental Hero", "Destiny Hero" and "Evil Hero" as separate archetypes in the TCG ("Masked HERO" and "Vision HERO" had not been released in the TCG at that time). This was despite the fact that "Evil Hero" was not an archetype at the time.

The designs of the "Evil HERO" monsters bear some similarity to various demonic superheroes, villains, and antiheroes, such as The Darkness, Hellboy, and Witchblade.

The "Evil HERO" monsters appear to have allusions to Hell. Most of them have the word "Hell" in their Japanese attack/effect names, as well as fire being a prominent feature among them; any instances of "Hell" are replaced with "Infernal" in English. For example, the attack name of "Inferno Wing" is "Inferno Blast" and its effect name is "Hell Backfire", "Infernal Sniper" (whose Japanese name is "Hell Sniper") has the effect name "Hell Shot". The Japanese names of "Infernal Gainer" and "Malicious Fiend" are "Hell Gainer" and "Malicious Devil" respectively. Additionally, when "Dark Gaia" (whose background appears to be Hell) was Summoned in the anime, a big burst of lava erupted from the ground.

Most "Evil HERO" Fusion Monsters have specific material requirements, and most of them require specific "Elemental HERO" monsters. As such, an "Evil HERO" Deck is functionally also an "Elemental HERO" Deck, and shares many of the same strategies aside from the additional requirement to search out "Dark Fusion". However, "Evil HERO Malicious Fiend", "Malicious Bane", and "Dark Gaia" have more generic material requirements, allowing them to be used in more diverse Deck builds.

The "Evil HERO" Main Deck monsters have largely supportive effects focusing on supporting the "Evil HERO" Fusion Monsters. The most important member is arguably "Adusted Gold", who can search out "Dark Fusion" or a card that lists it. Among the cards that lists "Dark Fusion", "Dark Calling" is a substitute for it that can also Summon "Evil HERO" Fusion Monsters but by using materials in the GY, allowing a Fusion Summon without the need for a field setup, while "Supreme King's Castle" allows "Evil HERO" Fusion Monsters to be Fusion Summoned without requiring "Dark Fusion", greatly expanding the flexibility of their Summons. This also allows them to be Summoned with "Super Polymerization, by using one of the opponent's monsters as Fusion Material. This strategy synergizes with the "Omni HERO"-style Deck that uses "Super Polymerization" to Summon "Elemental HERO Absolute Zero", "Elemental HERO The Shining", or "Elemental HERO Escuridao" using an opponent's monster as well.

The "Evil HERO" archetype benefits from generic "HERO" searchers and support cards, such as "Elemental HERO Stratos", "Vision HERO Vyon", and "Elemental HERO Shadow Mist". "Evil HERO", within a general "HERO" archetypal Deck, is often compacted to just the monster "Adusted Gold", the Spell "Dark Calling", and the Fusion Monster "Malicious Bane". "Adusted Gold" can search for "Dark Calling", and "Dark Calling" will then banish "Adusted Gold" and another suitable generic material to Summon "Malicious Bane", providing an easy and low-cost way to bring out a strong boss monster.

While the "Evil HERO" cards are also suitable as generic Fiend support, they function at their best when utilized with other "HERO" cards. 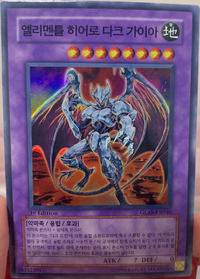 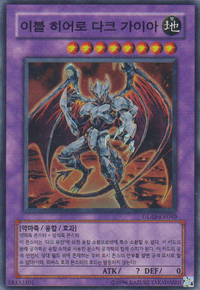