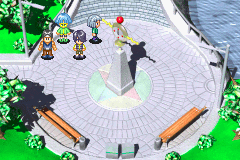 Weevil's followers or the Insect Army, known as Haga's followers (羽蛾の取り巻き Haga no torimaki) in the Japanese version, are a trio of characters in Yu-Gi-Oh! The Sacred Cards, who supported Weevil Underwood when he entered the Battle City tournament.

Two of the followers were present with Weevil at the Clock Tower Square just before the Battle City tournament began. Later at the park, all three followers stood by Weevil. The player defeated each of them before being allowed to Duel Weevil. Weevil watched their Duels in order to learn the player's strategies.

After being defeated by the Ghouls, Weevil and one his followers relocated to Clock Tower Square, while the others ran away.

The following cards can be won from Weevil's followers by the ante rule, provided the player does not wager a low-level ante card. The chance of winning a card is indicated by the "%" (chance out of 100) and "2048th" (chance out of 2048) columns.