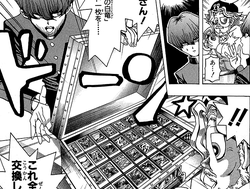 The duralumin case, filled with cards

The duralumin case (ジュラルミン ケース jurarumin kēsu) is an accessory of Seto Kaiba, in the Yu-Gi-Oh! manga. He uses it to carry important Duel Monsters cards and has on occasion taken advantage of its robustness, to utilize it as a weapon.

Kaiba attempted to purchase the "Blue-Eyes White Dragon" Duel Monsters card from Sugoroku Mutou, at Kame Game. He opened the case on the counter, revealing it to be full of cards and offered to trade all of them for the "Blue-Eyes". Sugoroku refused due to its sentimental value and advised Kaiba to similarly treasure each card in the case, in order to learn the true strength of the game. When Kaiba was later accused by Yugi Mutou of stealing the "Blue-Eyes White Dragon", he feigned innocence, but became frustrated with Yugi's persistence and struck him in the face with the case.[1] 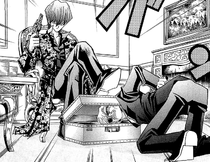 After waking from his coma and learning Mokuba Kaiba had been kidnapped, Kaiba collected his duralumin case,[2] using it to store cards and his Duel Disk prototypes,[3] before travelling to confront Maximillion J. Pegasus.[2] On Pegasus' island, he struck Croquet with the case, after being denied permission to see Pegasus. He held Croquet at gunpoint and instructed him to take the case to the guest room. The case was emptied and Croquet put his head inside, while Kaiba rested his foot over the case. He threatened to slam it shut and snap Croquet's neck, if he was kept waiting any longer. Having removed his important cards, Kaiba made it clear that he had no reservations in getting blood on the case, which would wash off easily.[4]

The duralumin case remained in Pegasus' holding, after he captured Kaiba's soul. Croquet later gave it to Yugi to return to Kaiba.[5]

Kaiba brought the case with him, when he met Ishizu Ishtar and dropped it to the floor, in surprise, when Ishizu gave him the God card, "The God of the Obelisk".[6]

During the Battle City tournament, Kaiba challenged Koji Nagumo to a Duel, after seeing him involved in an ante dispute. He tore up Koji's would-be ante, "Hyozanryu", saying he would have lost it in their Duel anyway. To compensate, he wagered all the cards in the duralumin case and allowed Koji to borrow cards from the case to strengthen his Deck before the Duel.[7]