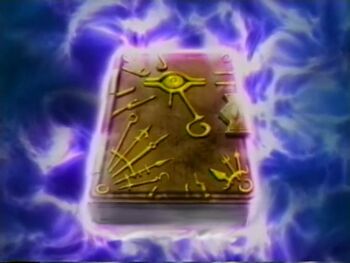 The Millennium Spellbook ("Millennium Tome" in the manga, and Sennen Majyutsu Sho in Japanese) is an ancient Egyptian Spell Tome dating many years before the time of King Aknamkanon. It is through a dark spell originating from this spellbook that the 7 Millennium Items were created. It is implied that Zorc Necrophades was responsible for the creation of this book, so that one day the Millennium Items would be created and he could be unleashed upon the Earth. However, the English dub claimed it to be an ancient relic from Atlantis.

In the Yu-Gi-Oh! universe, ancient Egyptian Pharaohs had been in possession of this spellbook for many generations, however no one had ever been able to translate its meaning. It was said that "whomever deciphers the book's ancient texts would be able to control a power known only by the Egyptian Gods themselves".

In the Pharaoh's Memories story arc, Aknadin explains the Millennium Spellbook is the main reason for Egypt's war against its neighbouring countries. If taken, the book lists spells dealing with "Shadow Alchemy" (RenkinJyutsu) and could provide the enemy with the ultimate power to create invincible armies. For this reason, Aknadin suggests to Pharaoh Aknamkanon (his brother) they should attempt to decipher the texts themselves as a countermeasure.

The Spell which Aknadin managed to translate is a Dark Ritual allowing its caster to forge 7 mystical treasures. These "Millennium Items" could eliminate Egypt's invaders, and bring tranquility to the realm once again. What Aknadin refrained from informing his brother was that in order to do so, 99 human sacrifices were required.

The village of Kul Elna became the victim of the Pharaoh Aknamkanon's unwitting decree, as Aknadin had the villagers slaughtered, their blood, bone, and flesh melted in with the gold that was cast in the mystic rite that formed the items (in the English dub of the anime, to replace this gory concept the inhabitants' "spirits" were harnessed instead, to complete the rite that forges the items), not knowing that there was a survivor who witnessed it all. Also, when the items were completed, the ground split open and the Millennium Ring fell into it with another person, before the item rose out of the ground in the Tablet of Lost Memories which also brought Zorc Necrophades with it.

It is unknown whether other spells contained in the Millennium Spellbook could be translated by Aknadin or his team of Royal Spellcasters. Beyond the Pharaoh's Memories arc, the spellbook is not mentioned again in the Yu-Gi-Oh! storyline.