"The Great Escape", known as "Great Entertainment Duel Tournament!!" in the Japanese version, is the sixty-second episode of the Yu-Gi-Oh! ARC-V anime. It first aired in Japan on June 28, 2015 and in Australia on October 12, 2016. It became available with official subtitles via Crunchyroll on January 10, 2017

Since the Duel between Yuya and Tokumatsu, the inmates have become more lively. Meanwhile, Shinji suggests that Yuya should participate in the "Great Entertainment Duel Tournament" which takes place in the Facility. As Sylvio and Tokumatsu enliven the Duel, Yuya learns that Crow and Shinji are planning a jailbreak!

At the start of the Duel, the Field Spell Card "Crossover" is activated, as per the rules of an Action Duel. It will allow the players to use Action Cards, but they may only have one in their hand at a time.

Turn 2: Chojiro
Chojiro finds and activates the Action Card, "Sound Rebound". Once per turn, the activation of Spell Cards cannot be negated. Chojiro activates "Super Koi Koi", which allows him to draw three cards and reveal them. If they are "Flower Cardian" monsters, he can Special Summon them, but their Levels become 2 and their ATK and DEF become 0. If non-"Flower Cardian" monsters are drawn, he has to send them to the Graveyard and take 1000 damage for each card. Chojiro draws and subsequently Special Summons "Flower Cardian Clover with Boar", "Flower Cardian Maple with Deer" and "Flower Cardian Peony with Butterfly" via this effect. He tunes his Level 2 "Clover with Boar" and "Maple with Deer" with the Level 2 Tuner monster "Peony with Butterfly" to Synchro Summon "Flower Cardian Boardefly" (2000/2000) in Attack Position. Chojiro activates the effect of "Treasure Boat" and places "Boardefly" underneath it.

At this moment, Yuya and the others are trying to escape the Facility, so the Duel ends with no result. 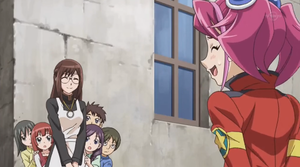 Zuzu is embarrassed by her own behavior.