"Against All Odds", known as "Unyielding Resolve" in the Japanese version, is the eighty-sixth episode of the Yu-Gi-Oh! ARC-V anime. It first aired in Japan on December 20, 2015 and in Australia on November 15, 2016. It became available with official subtitles via Crunchyroll on February 21, 2017.

As Celina is on her way to the Underground Labor Facility, a group of Sector Security attacks her and forcibly restrains her. Riley then appears, equipped with a Duel Disk, in order to rescue Celina from her predicament.

Turn 4: Riley
Riley Normal Summons "Film Magician" (0/0), which cannot be destroyed by battle and may make its ATK equal to the ATK of any monster that battles it during the Damage Step.

Turn 5: Security #1
Security #1 Normal Summons "Jutte Lord" (1600/1200). As it was Normal or Special Summoned, its effect activates, letting him Special Summon a "Jutte" monster from his hand. He Special Summons "Jutte Fighter" (700/900). Security #1 tunes the Level 4 "Jutte Lord" with the Level 2 Tuner monster "Jutte Fighter" to Synchro Summon "Goyo Catapult (800/2800) in Attack Position. He then activates its effect, letting him send a monster from his hand to the Graveyard to inflict 600 damage once per turn. He sends "Sasumata Gardna" (Riley: 2000 → 1400 LP).

Riley activates the effect of "Rock Blaster", letting him decrease an opponent's monster's ATK by 1000 once per turn (Security #2's "Goyo Catapult" 800 → 0). "Rock Blaster" attacks and destroys Security 2's "Goyo Catapult", with its effect increasing its ATK equal to the total Levels of all EARTH monsters currently on the field x 200, except itself ("Rock Blaster" 2200 → 4000, Security #2: 4000 → 0 LP). Riley Tributes "Rock Blaster" using the effect of "Nightmare Critical Loop", Special Summoning "Critical Eye" (1400/1000) from his Graveyard. As he controls "Critical Eye", he activates the Quick-Play Spell Card "Critical Overlay", letting him change an opponent's monster Level depending on its current Level. He targets the Level 6 "Goyo Catapult", changing it to Level 6. Then, he may treat "Critical Overlay" and "Critical Eye" as monsters with the same Type, Level, Attribute, ATK and DEF as the target with their effects negated. Finally, he may Xyz Summon a monster using "Critical Eye" and "Critical Overlay" as the Materials, but the Summoned monster will be destroyed during the End Phase. Riley overlays his two Level 6 monsters to Xyz Summon "C/C/C Rock Armor of Battle" (2500/2000) in Attack Position. He activates the effect of "Rock Armor", detaching an Overlay Unit to increase the ATK of "Rock Armor" by half of the combined DEF of all EARTH monsters on the field (2500 → 4900). "Rock Armor" attacks and destroys "Goyo Catapult" (Security #3: 4000 → 0 LP). 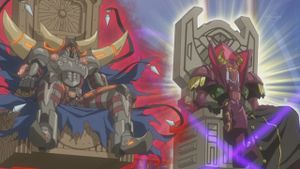 Declan controls "D/D/D Oblivion King Abyss Ragnarok" (2200/3000) and "D/D/D Duo-Dawn King Kali Yuga" (3500/3000) in Attack Position and he has three cards in his hand. He is facing at least six Sector Security officers. His opponents do not control any monsters. While neither the beginning nor the rest of the Duel is shown, Declan wins.