The Doktor is an antagonist in Yu-Gi-Oh! ARC-V. He is a member of Duel Academy. According to Sora Perse, he is one of the Professor's closest aides. He possesses the ability to brainwash individuals through the use of his "Fusion Parasite" cards.

The Doktor is a tall and thin old man with fair skin, sunken eyes and cheeks, bags under his eyes, small green pupils, and long white hair in a style reminiscent of Rex Goodwin. He wears a long dark gray coat with an orange brown center that is patterned with yellow lines, in addition to gray pants and black shoes.

The Doktor is ruthless, sadistic, and manipulative. He enjoys using his Parasite Monsters on people to force them to do what he wants, mainly by torturing his opponents by sending his brainwashed minions after them. If something goes wrong with his Parasite Monsters, the Doktor seeks ways to improve them.

The Doktor has created Parasite Monsters which he can implant in other individuals.[1] According to Sora, this gives the Doktor the ability to alter their hearts and minds, causing them to act as he wants them to.[2]

His title "Doktor" is pronounced "Dokutoru" (ドクトル) in the original Japanese rather than "Dokutā" (ドクター), which indicates that his title is in German. Josef Mengele was a German doctor who worked for the Nazis, earning his nickname "Angel of Death". Mengele's life inspired works in different media, and the German Nazi doctor stereotype inspired different kinds of doctor characters, many of them being villainous like the Doktor.

Not much is known about the Doktor, except that he is known to be in Leo Akaba's inner circle. At different points in time, he used his mind-controlling abilities on Rin, Lulu Obsidian, and Celina.

The Doktor was first mentioned by Sora to the Lancers as they traveled to Duel Academy. Sora revealed rumors about a high-ranking individual with the ability to alter people's hearts as the reason of why Celina betrayed them.[2]

The Doktor is seen in person next to Leo himself and learned that Zuzu Boyle was captured. Leo noted that he had all the necessary pieces and that it was time for Yusho Sakaki to learn the truth, while the Doktor shuffled his Deck, drawing "Fusion Parasite" with glee. Watching the Eastern and Western Towers through a monitor, he smiled after he watched Apollo and Diana being defeated at the hands of Yugo and Kite Tenjo respectively. He witnessed the reunion between Yugo and Rin while staring at his drawn "Fusion Parasite" with an evil smile.[3] As he watched Yugo and Rin Duel each other, the Doktor asked Leo his thoughts about his Parasite Monsters being able to program their hosts into being loyal to him. Leo praised his skill but warned him about losing the girls, and the Doktor told him that they must have ways to defend themselves due to their value. He reassured him that his Parasite Monsters were perfect. He laughed when he heard Yugo trying to make Rin remember herself and commented that the Rin he knew was gone, noting that his Parasite Monsters were more stubborn than Yugo. Rin defeated Yugo, and the Doktor congratulated her and called her back as the Professor was waiting for her.[1] The Doktor watched Shay Obsidian and Kite argue about Lulu's sanity and he wondered if the siblings' bond could break the Professor's will, while drawing "Fusion Parasite" again. He was proud that his Parasite Monster seemed to control Lulu despite her bond with her sibling, but he was pleasantly surprised when Shay defeated Lulu. He found the resulting data interesting and he left to make improvements to his Parasite Monsters.[4] At some point he placed a Parasite Monster into Zuzu's head, brainwashing her.

He laughed as he and Celina watched Lulu and Yuya Sakaki on monitors in his control room, and he stated that he knew something like this would happen and was glad that he had placed a Parasite Monster into a Duel Academy student in advance. He stated that the insects were drawn towards something and called Celina a queen.[5] He watched Lulu look for Kite in amusement, wondering whether or not he should proceed. Lulu met up with Yuya, and as they departed to help Shay, the Doktor decided that it was time for her to serve him and he drew "Fusion Parasite" again, turning Lulu against Yuya. Shay arrived during Yuya and Lulu's Duel; the Doktor saw him as an annoyance and dispatched Celina to deal with Shay. Celina tased Shay and joined the Duel, and the Doktor declared that it was time for Yuya to meet his maker. Celina Fusion Summoned "Parasite Queen", and the Doktor called it a success, claiming that his genius had created the ultimate Parasite Monster, and he told them to rampage to their heart's content. Yuya and Yuto declared that they would defeat the Doktor and save the girls; the Doktor dared them to if they could defeat Lulu and Celina as he stood with Rin and Zuzu.[6] 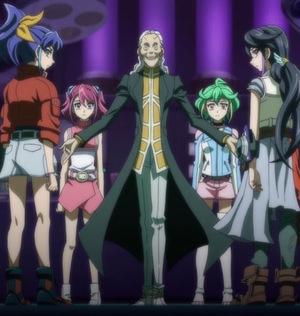 The Doktor with the bracelet girls under his control.

During the Duel, a Parasite Monster entered Yuya's ear, much to the Doktor's pleasure. He tried to place Yuya under his control, but to his surprise, Yuya was unaffected. Yuya Summoned "Odd-Eyes Pendulum Dragon", and the Doktor commented that Yuya's ace monster had finally appeared, but his Parasite Deck had yet to show everything off. He appeared to Yuya through a monitor, telling him how terrifying his Parasite Deck was and told Yuya he'd never be able to meet Zuzu because he would be defeated here. He showed Yuya that Zuzu was already under his control and cut the feed, but this prompted Yuya to defeat Celina and Lulu in a fit of rage. Celina and Lulu returned with Yuya pursuing them, and the Doktor introduced himself and trapped Yuya in a cage. He informed the Professor that Yuya had been secured and left with all four girls.[7] 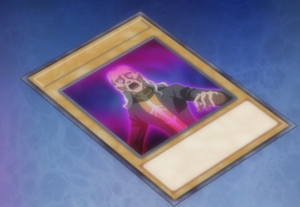 The Doktor is sealed into a card by the Professor.

Under the Professor's instructions, the Doktor brought the girls to him. He told the Professor that everything was ready and asked him to leave Yuya to him so he could find out why his insect disappeared from Yuya, wanting to experiment with the queen. The Professor was skeptical that the Doktor would be able to win, but the Doktor thought that it wasn't impossible and expressed confidence in his Parasite work. He told the Professor that as fellow researchers, they should share a similar curiosity in confronting challenging research. The Professor noted the Doktor's dangerous thinking and recalled his own past curiosity and proceeded to seal him into a card.[8]

After Z-ARC's defeat, the Doktor was freed from his card.[9]

His Deck is unknown, with his only revealed card being "Fusion Parasite". However, he refers to the Deck that Yuya Duels as "his" Parasite Deck, suggesting that it is similar to Celina's.