"Dark Scorpion", known as "Black Scorpion" ( Kurosasori) in Japan, is an archetype of DARK Warrior monsters who have Trigger Effects that activate when they inflict battle damage to their opponent, giving the controller a choice of two effects. The majority of these card effects disrupt the opponent's field, hand or Deck, with the exception of "Dark Scorpion - Meanae the Thorn" who instead searches out other "Dark Scorpion" cards. All members of this archetype are Level 3/4 monsters, except for the Level 5 "Dark Scorpion - Gorg the Strong".

The "Dark Scorpions" have been featured on numerous Spell and Trap Cards. "Don Zaloog" and "Dark Scorpion Burglars" were introduced in Pharaonic Guardian, "Cliff" in Magician's Force, and the rest in Dark Crisis.

Members of this archetype also appear as characters in video-games:

Members of the Dark Scorpions in their civilian disguises. 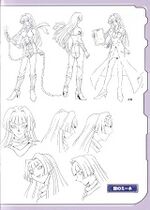 Depicted here is Meanae in full Dark Scorpion regalia as well as her in civilian clothing.

The Dark Scorpion's outfits consists of a grey, sleeveless, skin-tight top, featuring studs on the stomach, pants sectioned into grey and red layers, and grey wristbands with red tips. All members have a tattoo on their right arm of a scorpion, the name-giving "Dark Scorpion". Each member carries a distinct weapon, and sometimes feature additional holsters on their costume for them.

All members appeared in Yu-Gi-Oh! GX and, in addition to their normal attire, they all wore civil disguises. Cliff appeared as a security guard, Gorg as a janitor, Meanae as a school nurse, Chick as a Slifer Red student, and Don Zaloog as a police detective in a Sherlock Holmes guise.

The "Dark Scorpions" all have effects that trigger upon them dealing battle damage to your opponent, as seen in the following list:

Therefore, "Dark Scorpions" bring their own amount of removal effects, albeit them being relatively complicated to apply on a regular basis. They are fairly weak physically, but can benefit greatly from Spell and Trap Cards that boost their power or weaken the opponent's monsters.

There are also further options to apply the battle damage of the "Dark Scorpions": Monster removal like "Raigeki" or "Dark Hole" can clear the path before attacking with your monsters. Additionally, Equip Spells can help the group the get up to respectable ATK values. Examples include "Moon Mirror Shield", which will make the equipped monster run over everything while still applying the effect due to the 100 damage dealt or "United We Stand" to increase the ATK of the equipped monster by potentially huge sums.

"Don Zaloog" is the only Dark Scorpion that cannot be searched out or retrieved with the effect of "Meanae the Thorn", so including some copies of "The Warrior Returning Alive" and a copy of "Reinforcement of the Army" will be handy in a Dark Scorpion deck. Also, it is a good idea to have 3 copies of each of the Dark Scorpions except "Gorg the Strong" and "Chick the Yellow". "Dark Armed Dragon" is very handy for clearing the field to let the Dark Scorpions attack. Their DARK Attribute also makes them eligible for "Dark General Freed", protecting them from Spells and searches some of them out. "The Dark Creator" and "Dark Horus" can also be used to bring them back from the Graveyard.

Should you successfully activate "Dark Scorpion Combination" you may wish to give some thought as to which Dark Scorpion's abilities you use in what order. You may use the effect of "Chick the Yellow" to check the top of the opponent's Deck, then use another Dark Scorpion's effect to send the top card of their Deck to the Graveyard, or use the effect of "Gorg the Strong" to send a monster to the top of their Deck and then discard it the same way. After pulling off a "Combination", use "Meanae the Thorn" to retrieve the "Combination" card to play again next turn.

A commonly used Trap with Dark Scorpions is "Robbin' Goblin", and sometimes "Robbin' Zombie". Since the archetype focuses on inflicting battle damage to trigger effects (even if the damage is not great due to the Dark Scorpions being rather weak) those two cards will quickly deplete the opponent's hand and Deck, especially if you activate "Combination" and hit the opponent five times in a turn. Another card that can combo easily with Dark Scorpions is "Armor Breaker", allowing you to destroy an opponent's card whenever you successfully inflict battle damage (on top of protecting the equipped Scorpion from destruction once). Since "Chick the Yellow" and "Meanae the Thorn" have 1000 ATK, they can be used with "Crush Card Virus".