"Hieratic", known as "Hieroglyphic" ( Seikoku) in the OCG, is an archetype of LIGHT Dragon monsters. The archetype's playstyle involves having its monsters Tribute each other with their effects, in order to Special Summon themselves from the hand, activate their monster effects, or Trigger their Trigger Effects to Special Summon a Dragon Normal Monster from the hand, Deck, or Graveyard when they are tributed. 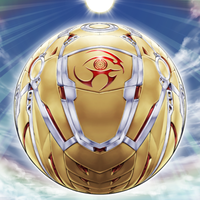 The artwork of "Hieratic Seal of the Sun Dragon Overlord", showing the marking based on the Eye of Horus found on all "Hieratic" monsters.

The "Hieratic" archetype is based on Egyptian hieroglyphs and the Ennead, a group of Egyptian gods from Ancient Egyptian mythology.

Each "Hieratic" monster has an "eye" symbol based on the Eye of Horus marked on its armor.

The "Hieratic" archetype revolves around having its monsters Tribute each other with their effects, in order to provide advantage and trigger their shared Trigger Effect to Summon Dragon monsters from the hand, Deck, or Graveyard.

Excluding the "Hieratic Seal" Main Deck monsters, the "Hieratic" Xyz monsters, and "Hieratic Dragon" of "Sutekh", "Asar", and "Nuit", all "Hieratic" monsters trigger a mandatory Trigger Effect when they are tributed (regardless if from the hand or field), to Special Summon 1 Dragon monster from the player's hand, Deck, or Graveyard, who will have 0 ATK/DEF.

This effect allows "Hieratic" monsters to compensate for the costs of being used as tribute fodder. The replacement monster would typically be summoned from the Deck, and would typically be a Normal Monster with some beneficial properties. Common options include Level 5 or 6 Dragon Normal Monsters to enable Rank 5/6 Xyz plays, or Tuner Dragon Normal monsters (e.g. "Galaxy Serpent") to enable Synchro plays.

The Deck's starters are "Hieratic Dragon of Tefnuit" and "Hieratic Dragon of Eset", who have easier Summoning conditions, and can still summon non-"Hieratic" Dragon Normal Monsters for more diverse plays; they would be first summoned onto the field, and then Tributed to Special Summon "Nebthet" or "Su" from the hand, triggering their Trigger Effects.

The other monsters in the archetype have more varied effects.

Externally, the archetype can combo with: