From Yugipedia
Jump to: navigation, search
For the card, see "Fusion Substitute". 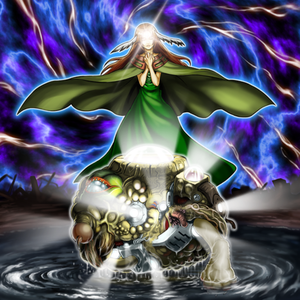 A Fusion Substitute Monster is a formerly official term describing a monster with an effect that allows it to be used as a material in a Fusion Summon in place of a material with specified conditions that the monster itself doesn't inherently fulfill. The term was used by previously official rulings from Upper Deck Entertainment, but is no longer an official term used by Konami.

These monsters are not to be confused with monsters with effects that change the name of a card, which can also be used to substitute named material requirements in Fusion Summoning.

All Fusion Substitute Monsters, save for "Shaddoll Core", share the following effect (or a variant of it with additional restrictions):

Due to their often old age, the specific card text for this effect is not written in a consistent manner between the individual cards. However, reprinted versions of Fusion Substitute Monsters often update their card text to this latest standard.

This effect is an Unclassified Effect. It applies on the field (even while face-down), in the hand, and in the Graveyard. It does not apply while in the Main Deck or while banished, so this effect cannot be used with cards that Fusion Summon using cards in the Deck or that are banished, such as "Future Fusion" or "Parallel World Fusion".[1]

The effect does not change the name of the card. Therefore, the substitution effect cannot be applied when Special Summoning Fusion Monsters with their Summoning conditions (also known as Contact Fusions). For the same reason, the substitution effect cannot be used in Fusion Summons with effects that use specifically named materials, such as "Cyberdark Impact!"[3][4]

If the Fusion Monster being Fusion Summoned has a condition that they must be Fusion Summoned with their listed Fusion Materials, then the substitution effect also cannot be applied.[5]

The effect also bypasses the Fusion Monster condition that they must be Fusion Summoned with their listed Fusion Materials, as it performs a Special Summon rather than a Fusion Summon. 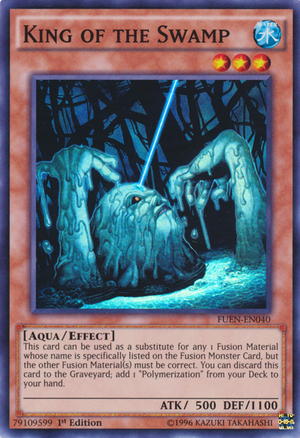 "King of the Swamp"