A Synchro Substitute Monster is a monster with an effect that allows it to replace a single Synchro Material Monster that must have a specific name or be of a specific archetype for the Synchro Summon of a Synchro Monster. Unlike a Fusion Substitute Monster, the other Synchro Material Monster(s) do not have to be the correct one(s), but there isn't a situation where this would be applicable.

For example, "Pain Painter" has its name treated as "Plaguespreader Zombie" while it is face-up on the field. It can be used as the Tuner monster in the Synchro Summon of monsters such as "Archfiend Zombie Skull" that require specific Tuner monsters. 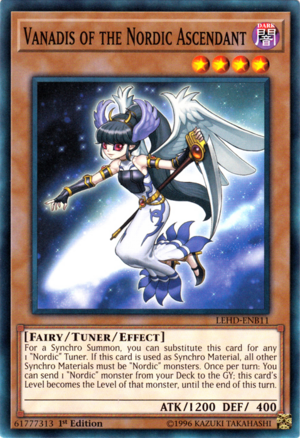 "Vanadis of the Nordic Ascendant"