From Yugipedia
Jump to: navigation, search
This article is about the terrain. For the Field Spell Card, see Umi. 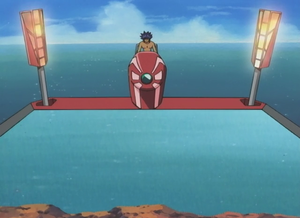 The Ocean or Sea field was shown briefly in Duelist Kingdom, used by Mako Tsunami. It powered up WATER monsters as well as hiding them under the water. Other monsters could not occupy it.

In early video games, the field can be changed to Ocean by activating "Umi", which grants the ATK and DEF changing effects of "Umi" to the affected area.

In Yu-Gi-Oh! The Duelists of the Roses, this terrain can also be made by using the Terrain Change Leader Ability, and the effects of "Ameba", "Aqua Dragon", "Kairyu-Shin", "Roaring Ocean Snake", "Root Water", "The Furious Sea King", "Violent Rain", and "Zone Eater".