Atem faced Zorc Necrophades in a battle, shortly after Zorc had been resurrected by Akhenaden.

The battle ended with Atem sealing his and Zorc's souls within the Millennium Puzzle, in a spell that required his name. When replayed in the Shadow RPG, Atem did not know his name, but was aided by his friends from the modern world, who extended the battle. 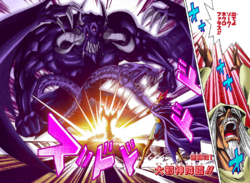 Zorc Necrophades tempted Akhenaden into creating the Millennium Items, in a ploy to release himself from the shadows. Zorc knew that by giving people the power the summon monsters that they would traffic demons and with that power the ambitious ones would fight among themselves. He counted on this, knowing it would lead one of them to gather the items in one place to resurrect him.[1]

In revenge for the Kul Elna massacre, Bakura, King of Thieves corrupted Akhenaden, by sealing some his evil in the Millennium Eye, worn by Akhenaden.[2] As Zorc had willed,[1] this led to Akhenaden inserting the seven Millennium Items into the Tablet of the Pharaoh's Memories to complete the Dark Contract to summon Zorc.[3][4]

Per the contract, Zorc bestowed some of his power upon Akhenaden, turning him into the High Priest of Darkness.[1]

Mana got the Dark Magician Girl to share her power with Mahado and the two attacked Zorc with "Black Burning Magic". Despite hitting him head on, the attack had little effect. Zorc then launched an attack, which hit numerous soldiers and killed Shada as he attempted to protect Atem.[6]

The High Priest of Darkness raises the Army of the Dead.

With only two High Priests remaining and Atem too weak to summon any of the three gods, the High Priest of Darkness highlighted the futility of fighting Zorc to Seto. Seto realized that the Shadow Priest was Akhenaden and demanded to know why he had betrayed them. Akhenaden paralleled the look on Seto's face to when Seto first saw him with the Millennium Eye and revealed that he was Seto's father. With Akhenaden siding with Zorc, Seto could not see him as anything other than an enemy. He ordered Duos to attack, but Akhenaden destroyed it with his shadow magic and claimed that Seto's illusions of justice would die with his ka.[6]

The Dark Magician and Dark Magician Girl, rushed to Seto's aid. Akhenaden then raised the Army of the Dead to fight them and the pharaoh's men. The magicians began fighting off the army, but ultimately lacked the power to take them all on and a number of soldiers were killed.[6] 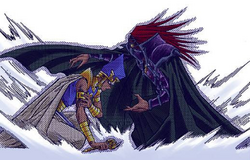 Akhenaden teleported himself and Seto to the palace, in the hopes of getting Seto to assimilate Kisara's ka.[6][7]

Siamun, took the Millennium Key, he had once given to Shada, back from Shada's deceased body,[6] and used its power to summon Exodia, the Demon God of the Palace, from its five tablets. Exodia instantly destroyed the Army of the Dead with a single "Exodia Blaze" attack.[7] 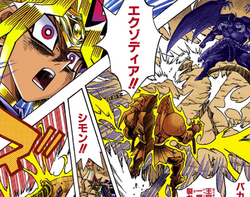 Atem tried fighting Zorc, but his ba fell too low to support his ka, causing the Dark Magician to disappear.[8]

The battle eventually ended when Atem sealed his soul[5] and Zorc's[9] in the Millennium Puzzle.[5]

The Millennium Puzzle, containing Atem[5] and Zorc's[9] souls was broken apart, at some point. This caused Atem's soul and memories to be broken with it. Among other things, he forgot his name, which was lost in history.[5]

In the Shadow RPG, Dark Yugi and Dark Bakura replayed the events of Atem and Zorc's life, through a tabletop game. This battle was among the events they replayed.

In the RPG, Dark Bakura had hourglasses, he could use borrow powers from the sleeping Zorc. He used one to freeze time, immobilizing the bodies of Dark Yugi's team, after Bakura, King of Thieves was defeated at Kul Elna. This allowed Akhenaden to take the Millennium Items and insert them into the tablet.[1]

With Zorc resurrected, Dark Bakura's team; Zorc and the High Priest of Darkness were at maximum ba, while Dark Yugi's team; Atem and the priests had taken significant damage and could not move due to the hourglass. Since Dark Bakura did not like one-sided games, he informed Dark Yugi that his friends existed in the game world as non-player characters (NPCs) and could be his only chance at winning.[1]

Dark Yugi pointed out that as a role player, Dark Bakura should have his team members act in character. And as such, the High Priest of Darkness should have the safety of his son, Seto, at heart and stop Zorc attacking. Dark Bakura was willing to stop Zorc attacking, in exchange for Dark Yugi's Seto card. Dark Yugi refused to make the trade, so Dark Bakura had Zorc dismiss Akhenaden's parental emotions as irrelevant to his cause and attack anyway.[10] 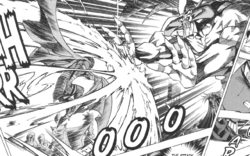 Hasan protects the pharaoh and the priests

The resurrection of Zorc prompted the NPC, Bobasa, to change to Hasan.[1] Hasan stressed the importance of the other NPCs, Yugi, Jonouchi, Anzu and Honda, finding Atem's name, which would be written in his tomb. He then flew to Kul Elna where he shielded Atem and the High Priests from Zorc's attack.[10]

While still immobilized by the time freeze, Atem questioned Akhenaden selling his soul to Zorc. In his response, Akhenaden attacked him with a demonstration of the shadow power it had given him. During the attack, the time freeze ended and Mahado, the Dark Magician, intervened with used his "Afterworld Warp" spell, which absorbed the attack.[11]

Yugi, Jonouchi, Anzu and Honda traveled to the pharaoh's tomb, where they encountered a portion of Dark Bakura's soul.[12] This Dark Bakura faced Yugi in a Shadow Game of Duel Monsters,[11] which Yugi won.[13]

The Dark Bakura at the RPG table then used the last hourglass to activate Zorc's "Natural Catastrophe" ability, causing the World of Memories to sink into the sand, suspecting this would kill Yugi and his friends before they could find Atem's name.[5] However they succeeded in finding the name and although they could not read the hieroglyphs, they memorized their appearance.[14] They also made it out of the tomb and came to Atem's aid, while he was facing Zorc[8] and engaged in another battle.