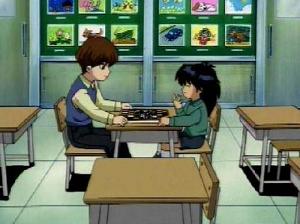 Seto and Mokuba playing chess at the orphanage.

The orphanage was where Seto and Mokuba spent their childhood after their parents died and their relatives used up their inheritance.[1]

Shortly after Mokuba was born, their mother died. When Mokuba was three years old, their father died in an accident. When Seto and Mokuba were ten and five respectively, their relatives used up their inheritance and sent them to the orphanage.[1]

Seto told Mokuba not to cry, promising to make life for them good one day. Seto would always tell Mokuba not to show weakness or it is all over and would advise him not to trust anyone.[1]

According to Mokuba, life at the orphanage was not so bad. Seto taught Mokuba how to play chess and they lived to play everyday. A photograph of the brothers playing chess was taken at the orphanage. Mokuba claims not to have seen Seto smile for a long time after that.[1]

Not long after the photograph, Gozaburo Kaiba came to the orphanage to adopt an heir. Seto knew that Gozaburo was the president of Kaiba Corporation and a world grandmaster at chess. Seto challenged Gozaburo to a game of chess, under the condition that if Seto won, Gozaburo would adopt both Seto and Mokuba. Gozaburo laughed at first, but said that Seto was an interesting kid and accepted the challenge. Seto won, but by cheating.[1]