From Yugipedia
Jump to: navigation, search
This article is about the Forbidden Memories character. For appearances in other games, see the "other appearances" section.

Nitemare, known as Card Majin (カード魔神 Kādo Majin, Card Demon God) in the Japanese version, is the main antagonist in Yu-Gi-Oh! Forbidden Memories. He initially appears in his less powerful form, DarkNite. In the Japanese versions, DarkNite is referred to as "Card Majin", while Nitemare is referred to as "Card Majin (true form)". A majin is a malevolent deity that causes misfortune and disaster.

He is mentioned in Yu-Gi-Oh! The Duelists of the Roses by his brother, Manawyddan fab Llyr.

Nitemare in his DarkNite form

Nitemare is known to be the creator of the Shadow Games. He is sealed away in the Forbidden Ruins, only to be awoken when the 7 Millennium Items are brought there.

When Heishin awakens DarkNite, he attempts to order him claiming it is part of the pact, but DarkNite says that he does not recall making a pact with Heishin. When Heishin begins to plea with DarkNite, he quickly grows tired of the conversation and turns Heishin into a card. Finding it to be the noisiest and ugliest he ever created, DarkNite burns it saying it does not deserve a place in his Deck.

DarkNite then turns to the prince and Seto saying that they would make nice additions to his Deck. Seto reminds the prince about the Millennium Item Cards. The prince then holds out the cards forcing DarkNite back. Unable to fully hold him back, the prince is left to duel DarkNite. After losing once DarkNite refuses to accept his defeat and turns into Nitemare demanding another Duel. The prince proceeds to defeat Nitemare, sending him back to where he came from.

The following cards can be won by defeating DarkNite and Nitemare.

After the Duel the player is awarded a skill; POW (power) or TEC (technical) and a ranking: S, A, B, C or D. Different cards are awarded, depending on the ranking. See Yu-Gi-Oh! Forbidden Memories § Spoils for how the rank is determined.

Nitemare was designed by Kazuki Takahashi. Yu-Gi-Oh! volume 18: "The Shadow of Marik" included a sketch of Nitemare and some cards Takahashi designed for video games. 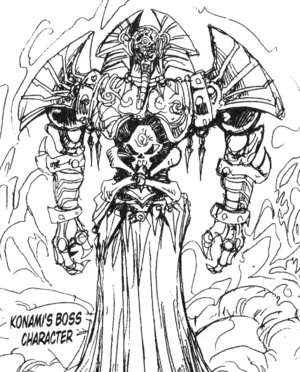 The line art of Nitemare