"Grave Risk, Part 1", known as "The Extra-Curricular Lesson is a Duel of Darkness!? (First Part)" in the Japanese version, is the twenty-seventh episode of the Yu-Gi-Oh! GX anime.

Professor Banner takes some of his alchemy class students to some ancient ruins on the island, and they are transported to another world. Jaden Yuki ends up in a life-or-death Duel with Gravekeeper's Chief.

Syrus Truesdale awakens to use the bathroom in the middle of the night. However, he enters the wrong door, and nearly steps into Professor Banner's room. He hears him talking to someone via a computer, who mentions something about a test and about students being buried in graves. Banner seems reluctant to go along with the plan, but eventually agrees. In class the next day, Banner gives an alchemy demonstration, and the experiment blows up in his face. Banner then hands out forms detailing his plans to take a trip to the ancient ruins on the island. Only Jaden, Syrus, Chumley Huffington and Alexis Rhodes opt to take the trip, though Banner forces the former three to do so. Alexis says that she's read about the ruins, and that they have a shady past, and there was some suggestion of Shadow Games taking place there. She believes they could have some connection to her brother's disappearance. Syrus is worried about what he overheard previously, but Jaden shrugs it off. When they arrive outside the ruins, Jaden suggests they sit and eat lunch before continuing on. Banner claims he had a special treat made by Ms. Dorothy, but then he discovers that Pharaoh stowed away in his backpack and ate his lunch, much to his horror. Banner asks his students if they could share their lunch with him, but they refuse. Pharaoh then uncovers a rune of the ground featuring the Eye of Wdjat. He presses, it activating its power. Green beams of light shoot out, and the sun appears to split into three, while the sky turns into a vortex of colors. 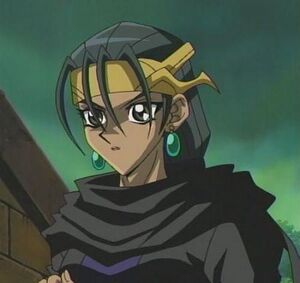 The woman who saves Jaden, also known as "Gravekeeper's Assailant".

Winged Kuriboh appears, and tells Jaden to run. Everyone takes cover in a small hole in the base of the ruins, except for Jaden, who insists he'll be fine and runs off. A flash of light blinds him, and when he awakens, he finds the ruins look completely new. The broken archway at the entrance is pristine, and the main ruins have been replaced with a step pyramid. Thinking he's dreaming, he tells Winged Kuriboh pinch him. It does so, and Jaden finds that Winged Kuriboh has somehow taken physical form. A woman interrupts them, telling them they are standing on sacred ground, and must hide to avoid capture. She pushes Jaden against a wall to keep him from being seen, and tells him his friends are already prisoners. After the guards pass, she informs him that anyone who sets foot in the gravesite without permission is buried alive in it. Jaden urges her to take him to where his friends are being held, and she agrees, stating that he's been warned. They arrive close to the site, and she tells him to wait in a hallway so he doesn't end up captured. He waits, and then hears someone nearby call for help. He hoists himself up to look out a window, and sees Syrus, Chumley, Alexis and Banner wrapped in bandages, except for their heads, trapped in coffins with the lids ajar. He's forced back to the ground by a group of guards and the Gravekeeper's Chief introduces himself. He declares his intention to execute them all by burying them alive, but agrees to pardon them if Jaden can defeat him in a challenge, and he reveals a Deck. 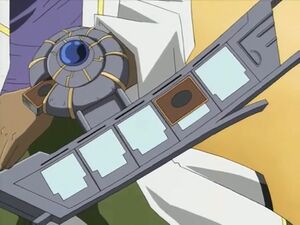 They take their places on top of opposite stone walls, with a large pit in between them, at the bottom of which are the coffins containing Jaden's group. The Chief's Duel Disk appears to be made out of stone, and the "blades" of a normal disk are magically materialized onto to the disk, though only a single, longer blade is used. The Chief takes the first turn, Seting a monster. Jaden Summons "Elemental HERO Bubbleman", drawing two cards via its effect, and Sets a card. The Chief Summons "Gravekeeper's Soldier" and then Flip Summons his "Gravekeeper's Guard", whose effect lets him return "Bubbleman" to Jaden's hand. Both monsters attack directly, leaving Jaden with 1500 Life Points. Jaden finds that the pain he feels is real, and these monsters are not holograms as he's used to. Jaden draws "Polymerization" and plays it, fusing "Elemental HERO Avian" and "Elemental HERO Burstinatrix" to Fusion Summon "Elemental HERO Flame Wingman". He attacks and destroys "Spear Soldier", with "Flame Wingman's" effect activating, inflicting the destroyed monster's attack points as damage to the Chief. Between the attack and effect, the Chief is reduced to 1900 Life Points. Jaden Summons "Wroughtweiler" in Defense Position to end his turn. The Chief switches "Guard" to Defense Position, and also Sets a monster. "Flame Wingman" attacks and destroys "Guard", with its effect reducing the Chief to 900 Life Points. The Chief plays "Pot of Greed", drawing two cards, and then Summons "Gravekeeper's Assailant" in Attack Position, who appears to be the woman who saved Jaden earlier. The Chief Flip Summons "Gravekeeper's Curse", whose effect inflicts 500 damage to Jaden. The Chief then activates the "Necrovalley" Field Spell Card, which will increase the attack of all his "Gravekeeper's" monsters by 500. He attacks "Flame Wingman" with "Assailant", whose effect allows him to switch the targeted monster to Defense Position. "Curse" destroys "Wroughtweiler", and Jaden is unable to activate its effect, as it is negated by "Necrovalley" as it targets a card in the Graveyard.

Turn 1: Gravekeeper's Chief
Chief draws. He then Sets a monster.

Turn 2: Jaden
Jaden draws. He then Normal Summons "Elemental HERO Bubbleman" (800/1200) in Attack Position. Since Jaden summoned "Bubbleman" while he had no other cards on his side of the field, its second effect activates, letting him draw two cards. Jaden then Sets a card ("Transcendent Wings").

Turn 4: Jaden
Jaden draws "Polymerization" and subsequently activates it to fuse "Elemental HERO Avian" with "Elemental HERO Burstinatrix" in order to Fusion Summon "Elemental HERO Flame Wingman" (2100/1200) in Attack Position. "Flame Wingman" attacks and destroys "Gravekeeper's Spear Soldier" (Chief 4000 → 3400). Since "Flame Wingman" destroyed a monster by battle and sent it to the Graveyard, its effect activates, inflicting damage to the Chief equal to the ATK of his monster (Chief 3400 → 1900). Jaden then Normal Summons "Wroughtweiler" (800/1200) in Defense Position.