"Rise of the Sacred Beasts, Part 2", known as "VS Kagemaru (Part 2) - Awakening of the Three Phantom Demons" in the Japanese version, is the forty-ninth episode of the Yu-Gi-Oh! GX anime. It first aired in Japan on September 7, 2005 and in the US on April 3, 2006.

Jaden continues his Duel with Kagemaru, and the latter Summons the third of the Sacred Beasts, "Raviel, Lord of Phantasms".

Kagemaru has used the Sacred Beasts to drain the energy of Duel Monster Spirits, and has used their power to de-age himself. Kagemaru continues his Duel with Jaden Yuki, and his "Fallen Paradise" Field Spell Card lets him draw three cards during his Draw Phase so long as he controls at least one Sacred Beast. He currently has two - "Uria, Lord of Searing Flames" and "Hamon, Lord of Striking Thunder". Jaden Summons "Wroughtweiler" and Sets a card. Kagemaru attacks with "Hamon", and "Wroughtweiler's" destruction lets Jaden add "Elemental HERO Bubbleman" and "Polymerization" from his Graveyard to his hand, but "Hamon's" effect deals 1000 damage to Jaden, reducing him to 600 Life Points. Kagemaru then attacks directly with "Uria", but Jaden activates his face-down "The Flute of Summoning Kuriboh" to Special Summon "Winged Kuriboh" form his Deck to take the hit. This activates the power of the "Sabatiel - The Philosopher's Stone" that Professor Banner had given to Jaden, and it moves from his Deck to this hand.

Jaden Summons "Bubbleman", drawing two cards via its effect, and then activates "Metamorphosis", Tributing "Bubbleman" to Special Summon "Neo Bubbleman" from his Fusion Deck in Attack Position. He equips it with "Bubble Blaster", increasing its attack by 800, and then attacks "Hamon". This activates "Neo Bubbleman's" effect, destroying any monster it battles with, while "Bubble Blaster" lets Jaden negate the battle damage that Jaden would have taken and save "Neo Bubbleman" from destruction by sending it to the Graveyard. With "Hamon" destroyed, Jaden Sets a card and ends this turn. Kagemaru attacks with "Uria", and Jaden activates his face-down "Bubble Illusion", letting him activate a Trap Card from his hand. He chooses "Hero's Rule 1: Five Freedoms", and declares Trap, meaning both players must remove up to five Traps in their Graveyards from play. With no Traps in Kagemaru's Graveyard, "Uria's" attack becomes zero, and allows "Neo Bubbleman" to destroy it. Kagemaru activates "Resurrection Tribute", destroying "Neo Bubbleman" and Special Summoning "Hamon" from his Graveyard. He then discards "Cemetary Bomb" to Special Summon "Uria" from his Graveyard, though its defense is only 1000. With both of them out, Kagemaru activates "Phantasmal Martyrs", discarding "The Creator" and "Divine Wrath" to Special Summon three "Phantasmal Martyr Tokens", which he Tributes to Special Summon the third Sacred Beast, "Raviel, Lord of Phantasms". The DEF of "Uria" increases by 1000 due the presence of another Trap in Kagemaru's Graveyard. 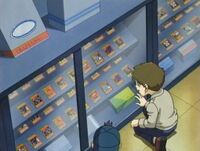 Two young boys watch on as the power of the Sacred Beasts drain the spirits of the cards in the display case of the Kame Game.

With all three Sacred Beasts on the field, their power increases, and Kagemaru drains further energy from cards around the world. Cards in the display case of Solomon Muto's Kame Game shop are shown fading away, as well as cards owned by Slade and Jagger Princeton. Chazz Princeton's "Ojama Yellow" has literally turned into a skeleton as his card form is fully drained. Jaden begins his turn, activating "Dark Factory of Mass Production" to add "Elemental HERO Avian" and "Elemental HERO Burstinatrix" from his Graveyard to his hand. He then plays "Polymerization" to fuse the two and Fusion Summon "Elemental HERO Flame Wingman". With a new monster Summoned to Jaden's field, "Raviel's" effect activates, Summoning a "Phantasm Token" to Kagemaru's field. Jaden knows he can destroy "Uria" with "Flame Wingman", but the other Sacred Beasts would reduce his Life Points to zero on Kagemaru's turn. Pharaoh arrives, chasing a small orb of yellow light, from which comes the voice of Professor Banner, the orb apparently being his soul. He tells Jaden to us "Sabatiel - The Philosopher's Stone", and explains that the card will allow him to think of any card in his Deck and "Sabatiel" will temporarily transform into that card (in Yu-Gi-Oh! video games this effect is replicated by allowing the player to move a card from their Deck to their hand) at the cost of half of Jaden's Life Points. Once this effect has been used thee times, the true effect of the card may be activated. Jaden thinks of "Fusion Recovery" and finds that Banner was telling the truth. Playing it, he adds "Elemental HERO Sparkman" and "Polymerization" from his Graveyard to his hand and then plays the latter to fuse the former with "Flame Wingman" to Fusion Summon "Elemental HERO Shining Flare Wingman", whose attack increases to 4600 due to the seven "Elemental Heroes" in Jaden's Graveyard. Another "Phantasm Token" is Summoned to Kagemaru's field via "Raviel's" effect. 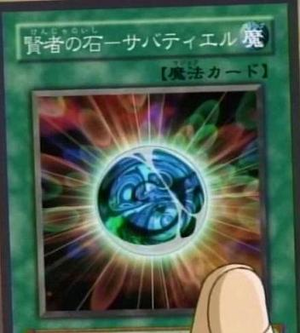 Jaden attacks "Hamon", but as "Shining Flare Wingman's" effect activates to inflict damage to Kagemaru, "Hamon's" shattered pieces intercept the effect, and Kagemaru explains that should "Hamon" be destroyed while in Defense Position, he can negate effect damage for this turn. Jaden uses this moment to choose "Sabatiel's" second transformation, which he Sets face-down to end his turn. Kagemaru switches "Uria" to Attack Position and then Tributes his two "Phantasm Tokens" via "Raviel's" effect, increasing the latter's ATK by the ATK of the Tributed monsters. He attacks "Shining Flare Wingman", and Jaden reveals his second "Sabatiel" transformation to have been "De-Fusion" which splits "Shining Flare Wingman" into "Flame Wingman" and "Sparkman", both in Defense Position, though two "Phantasm Tokens" are Summoned to Kagemaru's field. Kagemaru attacks and destroys them with "Raviel" and "Uria", respectively.

Jaden Summons "Elemental HERO Clayman", allowing Kagemaru to Summon one more "Phantasm Token". Jaden uses his third wish, and immediately plays it - "Miracle Fusion". This lets him remove the "Clayman" on his field and the "Bubbleman", "Avian" and "Burstinatrix" in his Graveyard from play to Fusion Summon "Elemental HERO Electrum". With it having been used three times, Jaden can now activate the second effect of "Sabatiel" - it equips to "Electrum" and multiplies its ATK by the number of monsters on Kagemaru's field. This means its ATK rises to 14,500. Jaden attacks "Raviel", winning the Duel. The Duel Spirits flood out of Kagemaru's body, and the cards around the world are restored, while "Sabatiel" dissolves in Jaden's hand. Without the power of the Sacred Beasts, Kagemaru reverts to his true, elderly age. He asks for forgiveness, and Jaden encourages him to literally stand on his own two feet, after Kagemaru had said that he could not. He does so, and believes that the Duel with Jaden allowed him to regain his own energy. Jaden gives him a hug, but ends up hurting the old man's back in doing so, and he has to be air-lifted via helicopter to a hospital. Chancellor Sheppard places the Sacred Beast cards back in their resting place, and the seven pillars sink back into the ground. Dr. Crowler reminds everyone that the promotion exams are next week, and Jaden is immediately more nervous than he ever was during his fight to save the world.

Turn continues from the previous episode.

Jaden has 1600 Life Points remaining and controls no cards.

Turn 6: Kagemaru
Because "Hamon, Lord of Striking Thunder" was Summoned on the turn Kagemaru Special Summoned "Uria, Lord of Searing Flames" from his Graveyard through its own effect, "Uria" may not attack this turn, so Kagemaru ends his turn.

Turn 7: Jaden
Jaden draws. He then Normal Summons "Wroughtweiler" (800/1200) in Defense Position and Set a card.

Turn 8: Kagemaru
Kagemaru draws. He then activates the effect of "Fallen Paradise" to draw two cards during his Main Phase. "Hamon" attacks and destroys "Wroughtweiler". The effect of "Hamon" then activates (Jaden 1600 → 600). Since "Wroughtweiler" was destroyed, its effect activates, letting Jaden add "Polymerization" and "Elemental Hero Bubbleman" from his Graveyard to his hand.

Turn 9: Jaden
Jaden draws "Bubble Illusion". He the Normal Summons "Elemental Hero Bubbleman" (800/1200) in Attack Position. Since "Bubbleman" was Summoned while Jaden had no cards on his side of the field, its second effect activates, letting him draw two cards.

"Neo Bubbleman" attacks "Hamon". Jaden then destroys "Bubble Blaster" via its second effect to prevent "Neo Bubbleman" from being destroyed and reduce all the battle damage that he would take to 0. Since "Hamon" battled with "Neo Bubbleman", the latter's final effect activates, destroying "Hamon" at the end of the Damage Step. Jaden then Sets a card.

Kagemaru then activates "Uria's" third effect to discard "Cemetary Bomb" and Special Summon "Uria" from the Graveyard (0 → 1000/0 → 1000) in Defense Position.

Turn 11: Jaden
Jaden draws "Dark Factory of Mass Production" and subsequently activates it to return "Elemental Hero Burstinatrix" and "Elemental HERO Avian" from his Graveyard to his hand. Jaden then activates "Polymerization" to fuse "Avian" and "Burstinatrix" together and Fusion Summon "Elemental Hero Flame Wingman" (2100/1200) in Attack Position. Since Jaden Summoned a monster, the first effect of "Raviel" ativates, Special Summoning a "Phantasm Token" (1000/1000) to Kagemaru's side of the field in Defense Position.

"Shining Flare Wingman" attacks and destroys "Hamon". Since "Shining Flare Wingman" destroyed a monster in battle and sent it to the Graveyard, its effct activates, inflicting damage to Kagemaru equal to the original ATK of "Hamon", but due to the last effect of "Hamon", Kagemaru takes no further damage this turn. Jaden activates "Sabatiel" to pay half his Life Points (Jaden 300 → 150) and swap "Sabatiel" with a Spell Card from his Deck. Jaden then Sets a card.

Turn 12: Kagemaru
Kagemaru draws. He then activates the effect of "Fallen Paradise" to draw two cards during his Main Phase. Kagemaru then switches "Uria" to Attack Position. He then activates the second effect of "Raviel" to Tribute his two "Phantasm Tokens" and increase the ATK of "Raviel" by the ATK of the Tributed monsters until the End Phase ("Raviel, Lord of Phantasms": 4000 → 6000/4000).

"Raviel" attacks "Shining Flare Wingman", but Jaden activates his face-down "De-Fusion" to return "Shining Flare Wingman" to the Fusion Deck and Special Summon "Flame Wingman" (2100/1200) and "Sparkman" (1600/1400) from the Graveyard in Defense Position. "Sabatiel" returns to Jaden's hand via its own effect after "De-Fusion" resolves. The first effect of "Raviel" activates, letting Kagemaru Special Summon two more "Phantasm Tokens" (1000/1000 for both) in Defense Position. A replay then occurs and Kagemaru uses "Raviel" to attack and destroy "Flame Wingman". "Uria" attacks and destroys "Sparkman".

Turn 13: Jaden
Jaden draws "Elemental HERO Clayman" and subsequently Normal Summons it (800/2000) in Attack Position. The first effect of "Raviel" then activates, letting Kagemaru Summon yet another "Phantasm Token" (1000/1000) in Defense Position. Jaden then activates "Sabatiel - The Philosopher's Stone" to pay half his Life Points (Jaden 150 → 75) and swap "Sabatiel" with the "Miracle Fusion" from his Deck.

Jaden then activates "Miracle Fusion" to remove from play "Clayman", "Bubbleman", "Avian" and "Burstinatrix" from his field and Graveyard in order to Fusion Summon "Elemental Hero Electrum" (2900/2600) in Attack Position. After "Miracle Fusion" resolves, "Sabatiel - The Philosopher's Stone" is added from Jaden's Deck to his hand.