"Rise of the Sacred Beasts, Part 1", known as "VS Kagemaru (Part 1) - Two Phantom Demons" in the Japanese version, is the forty-eighth episode of the Yu-Gi-Oh! GX anime.

The true leader of the Shadow Riders, Kagemaru, reveals himself and challenges Jaden Yuki, while utilizing the Sacred Beasts in an attempt to take over the world.

The Spirit Gates have opened without the aide of the Spirit Keys. Green light bursts from the gates and the ground quakes as seven stone pillars burst from the ground in the middle of the forest. The keys around Chazz Princeton's neck glow, and they forcefully pull him towards the forest, with the rest of the group rushing to follow him. The keys finally tear themselves free from Chazz, and each is absorbed by one of the seven pillars. Chancellor Sheppard and Dr. Crowler arrive, and everyone blames Chazz for what's happened. The ground shakes again, and a black box rises from the stone circle in the center of the pillars, and opens, revealing a smaller silver box, which glows, and the three Sacred Beast cards rise from it.

The group rushes towards them, and a voice calls out for them to stop. A plane arrives, and a strange machine is parachuted out of it. The machine lands, revealing a large, spider-like walker, which is a mode of transportation for a life-support bound elderly man in a tube. Sheppard recognizes him as Kagemaru, the Superintendent (Chairman in the Japanese version) of Duel Academy. He states he will now conduct a ritual to revive the Sacred Beasts. He reveals that he was the one that sealed them here in the first place, and gave the Spirit Keys to Sheppard - which had no actual function. The Spirit Gates would open when enough Duel Energy and fighting spirit was emitted from the island. The keys simply served as something for their keepers and the Shadow Riders to fight over in order to increase said energy. Zane Truesdale, Chazz and Atticus Rhodes all attempt to oppose him, but Kagemaru states the only opponent he'll accept is Jaden Yuki. He threatens to sink the entire island into the ocean if Jaden refuses, and with that, the spider walker opens, and mechanical arms grab the Sacred Beast cards.

Syrus Truesdale tosses Jaden his backpack, and he opens it to put on his Duel Disk. The Emerald Tablet Shadow Charm given to him by Professor Banner falls out of it, and from between its pages is a card - "Sabatiel - The Philosopher's Stone", which Jaden places in his Deck before beginning the Duel. Kagemaru activates his own Duel Disk, strapped to one of the mechanical arms of the spider walker. Jaden goes first, Summoning "Elemental HERO Burstinatrix" and Setting a card. Kagemaru Sets three cards, and specifically states that they are Traps, much to everyone's confusion. He then sends all three of them to the Graveyard, which allows to Summon the first Sacred Beast, "Uria, Lord of Searing Flames" in Attack Position. The spirit of "Ojama Yellow" calls to Chazz from his Deck, and states that feels sick. Chazz tells it to just watch the Duel. "Uria" begins with zero attack points, but gains 1000 for each Trap Card in his Graveyard, meaning it now has 3000 attack. He then uses its effect to destroy Jaden's face-down "Mirror Gate" and then attacks and destroys "Burstinatrix", ending his turn. 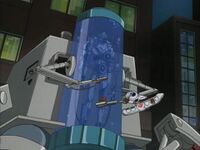 Kagemaru Dueling in his life-support tube, attached to his spider walker.

Jaden Summons "Elemental HERO Bubbleman", letting him draw two cards. He then plays "Polymerization", fusing "Bubbleman" with the "Elemental HERO Avian" and "Elemental HERO Sparkman" in his hand to Fusion Summon "Elemental HERO Tempest". He then activates "Skyscraper" and this attack boost gives "Tempest" enough attack points to destroy "Uria". He Sets a card and ends his turn. Kagemaru activates "Uria's" effect, letting him discard a Trap Card to Special Summon it back to the Field, with said discarded Trap granting it another 1000 attack points. Kagemaru attacks, and Jaden saves "Tempest" by sending his face-down "Transcendent Wings" to the Graveyard with "Tempest's" effect. Jaden plays "Pot of Greed" and the activates "H - Heated Heart", using it and "Skyscraper" to destroy "Uria" once more with "Tempest". Kagemaru discards another Trap Card, again Special Summoning "Uria" with another 1000 point attack boost. He plays his own "Pot of Greed" and activates a Field Spell Card called "Fallen Paradise", which destroys "Skyscraper" and allows Kagemaru to draw an extra two cards during each of his Draw Phases as long as he controls a Sacred Beast. He Sets three cards, specifically declaring that they are Spell Cards this time. He sends them to the Graveyard to Special Summon "Hamon, Lord of Striking Thunder", the second Sacred Beast, whose has an attack and defense of 4000. He uses it to destroy "Tempest", and its effect activates, dealing another 1000 damage since it destroyed a monster in battle. 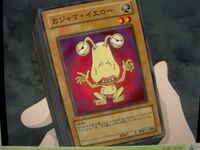 The effects of the Sacred Beasts take their toll on Chazz's Ojama Yellow.

The spirit of "Ojama Yellow" calls to Chazz again, and the picture on the card appears emaciated. The others check their own Decks, and their condition is the same. Kagemaru reveals that the Sacred Beasts suck the energy out of all other cards once Summoned, and that's why they were sealed (In the dub, Zane figures this information out after everyone sees their cards being drained by the Sacred Beasts). Only Jaden's cards are unaffected, since he's currently Dueling Kagemaru. However, he reveals that he can only utilize their power when he is within the circle of pillars. If he defeats Jaden, he'll be able to take the boy's power to speak to and control monster spirits, which will let him rule the world. He demonstrates their power, and it literally appears to de-age him. He breaks open the tube he's in, and water flows out. He emerges a much younger, heavily muscled man, and transfers the Duel Disk from the spider walker's mechanical arm to his own before hurling the entire walker away in a feat of strength.

Turn 2: Kagemaru
Kagemaru draws. He then Sets three cards. Kagemaru then sends his three face-down Trap Cards - "Mispolymerization", "Penalty Game!" and "Statue of the Wicked" to the Graveyard in order to Special Summon "Uria, Lord of Searing Flames" (0/0) in Attack Position.[Notes 1]

Due to the effect of "Uria, Lord of Searing Flames", it gains 1000 ATK and DEF for each Trap Card in Kagemaru's Graveyard. There are currently three ("Uria, Lord of Searing Flames": 0 → 3000/ 0 → 3000).[Notes 2] Kagemaru then activates the second effect of "Uria" to destroy Jaden's face-down "Mirror Gate". "Uria" attacks and destroys "Burstinatrix".

Kagemaru then Sets three cards. He then sends his three face-down Spell Cards - "Abyssal Designator", "Monster Reincarnation" and "Premature Burial" to the Graveyard in order to Special Summon "Hamon, Lord of Striking Thunder" (4000/4000) in Attack Position.[Notes 6]

Since Kagemaru summoned a monster during the turn "Uria" was Special Summoned, "Uria" is not allowed to attack this turn. "Hamon" attacks and destroys "Tempest" (Jaden 3800 → 2600). Since "Hamon" destroyed a monster by battle and sent it to the Graveyard, its effect activates, inflicting 1000 damage to Jaden (Jaden 2600 → 1600).