"Grave Risk, Part 2", known as "The Extra-Curricular Lesson is a Duel of Darkness!? (Second Part)" in the Japanese version, is the twenty-eighth episode of the Yu-Gi-Oh! GX anime. It first aired in Japan on April 13, 2005 and in the United States on December 15, 2005.

Jaden Yuki continues his Duel with Gravekeeper's Chief, narrowly avoiding defeat by stalling with Life Point-replenishing cards. As he loses Life Points, the lids of the coffins containing his friends close.

The Duel between Jaden Yuki and Gravekeeper's Chief continues, with the lives of Syrus Truesdale, Chumley Huffington, Alexis Rhodes and Professor Banner all hanging in the balance. Jaden draws "Winged Kuriboh", and after some encouragement from its spirit plays it in Defense Position. The Chief attacks with "Gravekeeper's Assailant" and Jaden activates his face-down "Transcendent Wings", letting him discard "Elemental HERO Bubbleman" and "Silent Doom" to send "Winged Kuriboh" to the Graveyard and Special Summon "Winged Kuriboh LV10". However, the Chief counters by sending the "Gravekeeper's Watcher" in his hand to Graveyard, which negates "Transcendent Wings", as its effect involves the discard of cards. Thus, the battle continues, and "Winged Kuriboh" is destroyed. Its effect will negate all battle damage for the turn, so the Chief does not attack with his remaining monster, but he does Set a card. Jaden draws, then plays "Pot of Greed" to draw two more cards. He Summons "Dark Catapulter" in Defense Position, activates "Mirage of Nightmare" and then Sets three cards to end his turn. The Chief draws, and during his Standby Phase, "Mirage of Nightmare" permits Jaden to draw until he has four cards in his hand. The Chief calls his efforts useless, and Tributes his "Gravekeeper's Curse" to Summon his own card to the field in Attack Position. Doing so, he is physically moved onto his own side of the field, Duel Disk and all. "Necrovalley" increases his attack points by 500, and reveals that his own effect grants his Graveyard immunity from "Necrovalley" and allows him to Special Summon a "Gravekeeper's" monster from his Graveyard. He chooses "Gravekeeper's Spear Soldier", who appears in Attack Position, before activating his face-down "Rite of Spirit" to Special Summon "Gravekeeper's Curse" from his Graveyard in Attack Position. His effect deals 500 damage to Jaden, leaving him with 500 Life Points. 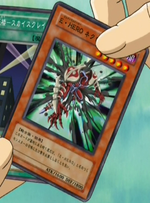 The Chief begins his Battle Phase, attacking Dark Catapulter" with "Gravekeeper's Assailant", who appears to hesitate. Regardless, her effect switches "Dark Catapulter" to Attack Position. Jaden activates his face-down "Emergency Provisions", sending "Mirage of Nightmare" and his face-down "Fusion Sage" to the Graveyard to gain 2000 Life Points. The attack hits, destroying "Dark Catapulter". In the Japanese version, the Chief slaps Assailant across the face, telling her to obey her Chief next time. In the English version, he simply lectures her. The Chief reminds Jaden that he still has his own attack to perform, and attacks Jaden directly, but Jaden activates his face-down "Draining Shield", negating the attack and increasing his Life Points by 2400. Still, the Chief attacks directly with "Spear Soldier" and "Curse", reducing Jaden to 600 Life Points. Jaden states he still made it past the turn, and has what he needs to win. The Chief activates "Royal Tribute", which forces both players to discard all monster cards they have in their hand. Jaden discards "Elemental HERO Sparkman", "Elemental HERO Clayman" and "Elemental HERO Necroshade". This leaves Jaden with only "The Warrior Returning Alive" in his hand, and he cannot play it due to "Necrovalley". Jaden draws "Elemental HERO Bladedge". He states that "Necrovalley" may negate effects that target cards in the Graveyard, but it does not negate ones that come from cards already in the Graveyard. Thus, he activates the effect of the "Necroshade" which he was forced to discard with "Royal Tribute". This lets him Normal Summon and "Elemental Hero" monster without Tribute, but only once during the current Duel. He Summons the "Bladedge" he drew and attacks "Curse" with it, reducing the Chief's Life Points from 900 to 0.

The Chief collapses, and Jaden runs to him, hoping he is not hurt. The Spear Soldier and Guard still present ready their spears, but the Chief tells them to stop. The Chief compliments Jaden on his Dueling skills, and Jaden tells him he was impressed with the Chief's skill as well, and that he actually enjoyed the Shadow Game. He also compliments the Chief's monsters, who are still present as members of the Chief's tribe. The Chief tells him that only one person ever survived a Shadow Game against him prior to his, and gifts Jaden with one half of a golden pendent. He tells him that the other person that survived the ordeal has the other half, and should Jaden ever participate in another Shadow Game, the pendent should prove useful. The Chief releases everyone from the coffins and the group gathers at the bottom of the pyramid. Banner tells Jaden he knew that he would pass the test, perplexing everyone as what he means by that. The Chief tells them that to get back to their own world, they must go to the gate of the tomb and wait for the three suns to converge into one. However, some of the Chief's guards are not happy with the group escaping punishment, and still wish to execute them. They are stopped by the Gravekeeper's Assailant, who had previously found Jaden on the grounds in the first place. She tells Jaden to deliver a message to the person who holds the other half of the medallion - that she hasn't forgotten him and believes they will meet again, while informing them her name is Yasmin. The guards part, and the group is allowed to leave, with Yasmin telling them that Winged Kuriboh will be able to lead them out. They run towards the gates, but Chumley trips and injures his leg while en route. He tells them to leave him behind, and the spirit of his "Des Koala" card materializes, who carries him the rest of the way across. The same green beams of light that brought them there appear, and they end up back in their own world.

Jaden has 1000 Life Points remaining and controls one set card.