"Field of Screams, Part 2", known as "Kaiser VS Camula - Phantom Demon's Gate is Activated!" in the Japanese version, is the thirty-second episode of the Yu-Gi-Oh! GX anime. It first aired in Japan on May 11, 2005 and in the United States on February 2, 2006.

In an effort to end Camula's crusade, Zane Truesdale steps forward to Duel her. He dominates the early Duel, but is soon faced with a decision in which he is forced to balance the worth of his own soul against that of his brother's.

The remaining Spirit Key holders gather at the infirmary, where Jaden Yuki is still injured. Despite this, he insists that he'll be the next one to challenge Camula. Chazz Princeton tells him he'd be useless, as he's still weak from his Duel with Nightshroud. He eventually agrees to sit out, while Chazz and Bastion Misawa argue over who will face Camula. Zane Truesdale does not participate in the conversation, and leaves, intent on Dueling Camula himself, in an effort to save Dr. Crowler's soul. One of Camula's bats is nearby, and she can sense Zane's imminent arrival through it. Chazz attempts to rebuild his Deck, while he is pestered by Ojama Yellow, who soon realizes that the doll with Crowler's soul sealed in it is able to communicate with them. Camula's bats gather outside, flying about, and the Spirit Key holders journey back to Camula's castle, Syrus Truesdale and Chumley Huffington accompanying them, the latter carrying Jaden on his back. As they reach the main room, Camula appears, and Jaden, Bastion and Chazz all attempt to challenge her. She declines them all, and challenges Zane, beginning to flirt with him at the same time, and he accepts.

Camula reiterates that both the Spirit Key and their souls are at stake, and the two activate their Duel Disks to start the Duel. Camula goes first, placing "Vampire Lady" in Defense Position and Setting a card to end her turn. Zane immediately plays "Power Bond", fusing the three "Cyber Dragons" in his hand to Fusion Summon "Cyber End Dragon" in Attack Position, whose original attack points are doubled via "Power Bond". Syrus is concerned that Zane played "Power Bond" so early. Camula reminds Zane of that card's risk - he was take damage equal to "Cyber End Dragon's" original attack points during his End Phase. Unperturbed, Zane attacks, but Camula activates her face-down "Red Ghost Moon", discarding "Zombie Werewolf" to add "Cyber End's" attack points to her own Life Points and instantly end Zane's Battle Phase. Zane plays the Quick-Play Spell Card "De-Fusion", returning "Cyber End" to the Fusion Deck and Special Summoning his three "Cyber Dragons" from his Graveyard in Attack Position. This cancels the effect of "Red Ghost Moon", and also prevents him from taking damage from "Power Bond". Zane Sets the last card remaining in his hand to end his turn. Camula Tributes "Vampire Lady" to Summon "Vampire Lord" and then removes it from play to Special Summon "Vampire Genesis" in Attack Position. 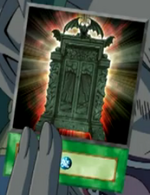 "Illusion Gate", the card that turns the Duel on its head.

Camula attacks, and Zane activates his face-down "Attack Reflector Unit", Tributing a "Cyber Dragon" to Special Summon "Cyber Barrier Dragon" from his Deck in Attack Position. With its effect, Zane is able to negate the first attack his opponent performs each turn, so long as "Barrier Dragon" is in Attack Position. Zane begins his turn, playing "Pot of Greed" to draw two more cards. He then plays "Photon Generator Unit", Tributing his remaining two "Cyber Dragons" to Special Summon "Cyber Laser Dragon" from his Deck in Attack Position. With its effect, it may destroy one monster that has a higher original ATK or DEF higher than its own ATK. This destroys "Vampire Genesis, and Zane attacks directly with both of his monsters, reducing Camula to 800 Life Points. Zane Sets a card to end his turn. Camula is furious, and activates "Illusion Gate", the eye on her Shadow Charm glowing red as she does so. She explains that this card first destroys all monsters on her opponent's side of the field. Camula then appears to split into two, with each the copies taking turns explaining the rest of the effect. It may Special Summon any monster that's been used during the Duel thus far, ignoring the Summoning conditions. However, it comes at a high price - Camula must offer a own soul to the Sacred Beasts in exchange for its activation, should she lose the Duel. One of the copies flies at Syrus, biting his neck and carrying him back up the Dueling platform. Camula Summons "Cyber End Dragon" in Attack Position. Should it be destroyed, Syrus' soul will be forfeit.

Zane has "Call of the Haunted" face-down, and contemplates activating it. This would let him Special Summon "Cyber Barrier Dragon" and negate the attack of "Cyber End", and give him an opportunity to take his next turn, and perhaps draw something that could help him win. Syrus urges him to do so, and sacrifice his soul in order to prevent that Sacred Beasts' revival. Zane tells him that he's improved greatly as a Duelist since he came to Duel Academy, and that he can't let that potential go to waste. Zane does nothing, and Camula attacks directly with "Cyber End Dragon", winning the Duel. Zane's Spirit Key falls, and he goes to his knees, his eyes going blank as his soul is transferred into another one of Camula's dolls. Camula vanishes, the doll in hand, promising to love it as part of her collection. Jaden is furious, and chides Camula for turning Dueling from something fun to a game with lives in the balance. He vows to be her next opponent, and defeat her to recover the souls of Crowler and Zane.

Turn 5: Camula
Camula draws "Illusion Gate" and subsequently activates it by using her Shadow Charm to offer the soul of Zane's brother, Syrus. Should she lose the Duel, the offered soul will be taken. The effect of "Illusion Gate" then destroys all monsters on Zane's side of the field and Special Summons "Cyber End Dragon" (4000/2800) from Zane's Graveyard to her side of the field in Attack Position, ignoring the Summoning conditions. "Cyber End Dragon" attacks directly. Zane contemplates on using his face-down "Call of the Haunted" to Special Summon "Cyber Barrier Dragon" and activate its effect to negate the attack, but realizes that he can only save Syrus' soul by losing. He does not respond to the attack and the attack continues (Zane 4000 → 0).

In the Japanese version, Daitokuji hides under the bed in the infirmary as the others talk about Camula, and tells them to inform her that he is absent today should she come for him. In the English version, Banner makes a pun involving the word "catatonic", and chases Pharaoh under the bed, who appeared to think the joke applied to him.

In the Japanese version, Sho expresses concern that his brother played "Power Bond" on his first turn, and thinks that he seems different today then when he usually Duels. In the English version, Syrus believes Zane is just "using the card" rather than "playing it", which references the terms used in episode 8.

In the Japanese version, Camula complements Ryo on his tactic of using "De-Fusion", but states it doesn't change the fact that he's lost his trump card. In the English version, she instead tells him she promised him some fun, and that "Vampire Genesis" is what she was talking about.

In the Japanese version, when Camula's spirit kidnaps Sho, she bites his neck in order to take control of him. This is edited out of the English version.

In the English version, Syrus states that his mother always told him that he "got the looks", while he believes that Zane got "just about everything else". This is not present in the Japanese version.