"The Little Belowski", known as "Exhaustion! Moke Moke Duel" in the Japanese version, is the twenty-third episode of the Yu-Gi-Oh! GX anime. It first aired in Japan on March 9, 2005 and in the United States on December 8, 2005.

Jaden Yuki is forced to Duel Belowski, a former Obelisk Blue student who was isolated from the rest of Duel Academy due to his strange powers. Dr. Crowler hopes that Belowski's powers will rid Jaden of his motivation to Duel, thus disallowing him from participating in the Duel against North Academy's representative.

Dr. Crowler is unable to accept that Jaden Yuki has officially been declared Duel Academy's representative against North Academy. However, he states he still has a last resort to stop this from taking place. He arrives at a chicken coop in a fenced area deep in the forests surrounding the school, and is immediately assaulted by chickens. Also in the fence is a sandbox, which he runs to, uncovering a secret hatchway beneath the sand. He manages to enter it, but due to the chickens still attacking him, he falls in, rather than being able to use the ladder. Eventually he detaches himself from the chickens. He dons a strange astronaut-like suit, and a bridge extends outward to let him enter a large sphere after scanning a card key.

Jaden is sitting in class, attempting to rebuild his Deck, and is unable to decide what to take out. Alexis Rhodes, Syrus Truesdale, Bastion Misawa and Chumley Huffington approach him, and all ask him to put their cards into his Deck - "Etoile Cyber", "Blade Skater", "Power Bond", "Water Dragon" and "Des Koala", respectively. He declines, but they will not leave him alone. He runs, and manages to lose them by rounding a corner. He wants to rebuild his Deck in peace, and ends up on Duel Academy's roof. However, he finds he's not alone, and meets a short student dressed in a tattered Obelisk Blue uniform and sandals, who introduces himself as Belowski. Winged Kuriboh appears, and Belowski reveals that he can also see spirits. Belowski challenges him a Duel, stating he's always wanted to Duel someone that could see spirits. Jaden's friends arrive, while Crowler watches the Duel from atop one of the pillars, still dressed in his strange suit. The Duel begins, and Belowski Summons "Mokey Mokey" in Defense Position, with all of Jaden's friends remarking how cute it is while Chumley yawns, beginning to feel sleepy. Belowski Sets two cards to end his turn. Jaden Summons "Elemental HERO Sparkman" in Attack Position and then plays "Polymerization", fusing the "Elemental HERO Avian" and "Elemental HERO Burstinatrix" in his hand to Fusion Summon "Elemental Hero Flame Wingman" in Attack Position.

Jaden attacks with "Sparkman", destroying "Mokey Mokey". Belowski activates his face-down "Human-Wave Tactics", which will let him Special Summon the same number of Level 2 or lower Normal Monsters were destroyed during each turn during that turn's End Phase. Jaden attacks directly with "Flame Wingman", ending his turn. "Human-Wave Tactics" lets Belowski Special Summon "Happy Lover" in Attack Position, and he then Summons another "Mokey Mokey" in Attack Position as well. He activates "Mokey Mokey Smackdown" and then attacks "Sparkman" with "Happy Lover", destroying his own monster. "Mokey Mokey" turns bright red, and Belowski explains that if a Fairy-type monster is destroyed in battle, "Mokey Mokey Smackdown" will raise the ATK of all "Mokey Moke]s" on the field to 3000 for the duration of the turn. "Mokey Mokey" destroys "Flame Wingman", then Belowski activates "Mystic Wok" to Tribute "Mokey Mokey" and add its ATK to his LP, thus recovering all the damage he had to take to set up his combo and increasing his LP to 4100. He ends his turn, and "Human-Wave Tactics" lets him Special Summon "Haniwa" since "Happy Lover" was destroyed. Jaden's friends urge him to relax and stop fighting, and by this point, Chumley has been affected enough by Belowski's strange powers to fall unconscious.

Crowler reveals himself, jumping down from the pillar he was hiding on. He explains that three years ago, Belowski was Duel Academy's top Duelist, and a series of short flashbacks are shown to his previous Duels. Crowler explains that eventually, Belowski's opponents began to lose their motivation, and they all dropped out of the Academy. Belowski states he has no idea why it happens, but it always does after he uses "Mokey Mokey". In order to protect the Academy's students, Belowski was isolated within his own dorm, which included a virtual paradise. The Duel continues, and Jaden Summons "Elemental HERO Wildheart", who he uses to destroy "Haniwa". "Sparkman" attacks directly, and Jaden Sets a card to end his turn. "Human-Wave Tactics" lets Belowski Summon another "Happy Lover" in Attack Position. Crowler questions why all of Jaden's motivation is still present, while his friends have all fallen asleep. Belowski ignores him, and plays "Pot of Greed", drawing two cards. He then plays "Dark Factory of Mass Production", adding the two "Mokey Mokeys" in his Graveyard to his hand. He fuses them with the third "Mokey Mokey" in his hand using "Polymerization" to Fusion Summon "Mokey Mokey King", which appears floating next to the Academy, taking up an absurd amount of space. However, it still has only 300 ATK, but Belowski attacks "Wildheart" anyway. "Mokey Mokey King" is destroyed, but its effect Special Summons all three "Mokey Mokeys" from the Graveyard. 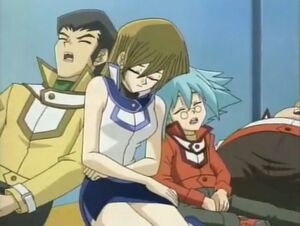 "Happy Lover" attacks "Wildheart", destroying itself, but this increases the ATK of all three "Mokey Mokeys" to 3000 via "Mokey Mokey Smackdown". The first "Mokey Mokey" destroys "Wildheart", and Jaden protects "Sparkman" from the second "Mokey Mokey" by activating his face-down "Hero Barrier", negating the attack. The third "Mokey Mokey" attacks and destroys "Sparkman" afterwards. Belowski ends his turn, with "Human-Wave Tactics" letting him Summon another "Happy Lover" in Defense Position. He then activates his face-down "Gift of The Mystical Elf", gaining 300 LP for each monster on the field, bringing him back up to 1800. Jaden Summons "Elemental HERO Bubbleman", drawing two cards. He then plays "Hero Heart", which will let "Bubbleman" attack twice if Jaden halves its ATK. He uses the first attack on a "Mokey Mokey", which increases the attack points of the other two to 3000 via "Mokey Mokey Smackdown". Despite this, he attacks another "Mokey Mokey". He plays the Quick-Play Spell Card "Bubble Illusion", which lets him activate a Trap Card from his hand when "Bubbleman" is on the field. He chooses "Mirror Gate", which switches control of the two battling monsters. "Mokey Mokey" destroys "Bubbleman" reducing Belowski's LP to 0. Belowski theorizes that his powers did not affect Jaden because he loves Dueling far too much. After this, Belowski falls alseep and Jaden attempts to wake up his friends by offering to use the cards they offered him earlier, but that fails.

"Sparkman" attacks and destroys "Mokey Mokey". Belowski then activates his face-down "Human-Wave Tactics". Now during each End Phase, Belowski can Special Summon a number of Level 2 or below Normal Monsters from his Deck equal to the number of Level 2 or lower Normal Monsters that were destroyed in battle that turn. "Flame Wingman" then attacks directly. (Belowski: 4000 → 1900 LP). On Jaden's End Phase, Belowski Special Summons "Happy Lover" (800/500) from his Deck in Attack Position via "Human-Wave Tactics".

On Belowski's End Phase, he Special Summons "Happy Lover" (800/500) from his Deck in Defense Position via "Human-Wave Tactics". At the same time, the effect of "Mokey Mokey Smackdown" expires (all three "Mokey Mokey": 3000 → 300 ATK). Belowski then activates his face-down "Gift of The Mystical Elf" to gain 300 LP for each monster on the field. There are currently four (Belowski: 600 → 1800 LP).

Turn 6: Jaden
Jaden draws "Elemental HERO Bubbleman" and subsequently Normal Summons it (800/1200) in Attack Position. Since Jaden Summoned "Bubbleman" while he had no other cards on his side of the field, its second effect activates, allowing Jaden to draw two cards. Jaden then activates "Hero Heart" to halve the ATK of "Bubbleman" ("Bubbleman": 800 → 400 ATK) until the End Phase and allow it to attack twice during this turn's Battle Phase.