Dr. Crowler attempts to get Jaden Yuki expelled from Duel Academy, but instead catches Syrus Truesdale in his trap. Jaden Duels Alexis Rhodes, with Alexis agreeing to remain silent about Syrus' trespassing in the girl's dorm if he wins.

Crowler comments that he wasn't expecting any more from a "drop-out boy" ("Slifer slacker" in the dub). Syrus feels embarrassed about what he did, but Jaden Yuki defends Syrus by reminding Crowler that Jaden defeated him. Crowler is infuriated about what Jaden did. Later during Lyman Banner's class, Syrus thanks Jaden for giving him that support.

Later, Crowler writes a fake love letter and puts in what he believes was Jaden's locker. It turns out to be Syrus' locker. Syrus reads the note and believed that Alexis was in love with him. The letter said to meet her behind the girl’s dormitory at midnight.

Meanwhile, Crowler hid in the bushes behind the dormitory. He planned to take a picture of Jaden trespassing and breaking school rules, so that he would be expelled. (this is because the girls were bathing).

Alexis and her roommates Mindy and Jasmine are in an outdoor bath, discussing male students, though Alexis does not seem interested in the conversation (in the dub she shows interest in Jaden and swimsuits are added).

While outside, Syrus showed up and Crowler was disappointed to find out that his plan backfired. The girls caught Syrus and he explained to Alexis about the letter. It was obvious to her that someone set Syrus up, but she decided to use the situation to her advantage.

Meanwhile, Jaden received an anonymous e-mail saying to come to the girl’s dorm if he wants to see Syrus again. Jaden came and Alexis challenged him to a Duel. If he lost, Alexis bluffed she'd report them to the chancellor. Jaden agreed and was ready to Duel.

Afterward, Alexis kept up her end of the deal and let the two friends go. Jaden hoped to Duel Alexis again sometime, especially since it was such a close Duel.

In the English version, Mindy and Jasmine begin to suspect that Alexis might have a crush on Jaden. This is not present in the Japanese version, where Alexis simply describing Jaden by the ambiguous term "interesting". 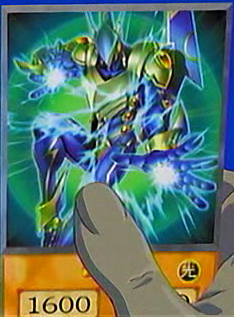 In the dub, "Elemental HERO Sparkman" is shown as an Effect Monster instead of a Normal Monster.