The inter-school Duel between Jaden Yuki and Chazz Princeton continues, with the latter continuing his assault with "Armed Dragon LV7" and the former unveiling new cards to counter this.

Chazz Princeton has just declared a direct attack with his "Armed Dragon LV7" against Jaden Yuki in the interschool match between North Academy and Duel Academy. Jaden has 1600 Life Points, while Chazz still has 3600. Jaden protects his Life Points by activating his face-down "Hero Spirit", reducing the Battle damage to zero. He draws "Winged Kuriboh" and Summons him in Defense Position. The spirit of "Ojama Yellow" appears before Chazz, and "Winged Kuriboh" points this out to Jaden, who is surprised that Chazz obtained a Duel Spirit. Chazz attacks and destroys "Winged Kuriboh" with "Armed Dragon LV7" to end his turn. Syrus Truesdale questions why he didn't use the effect of "Armed Dragon LV7" to destroy "Winged Kuriboh" and then attack directly, with Bastion Misawa responding that "Winged Kuriboh's" effect would make Jaden immune from damage during the turn its destroyed. Jaden plays "Pot of Greed", drawing two cards, and declaring he's drawn the card that will turn the Duel around. He discards "Hero Kid" to activate "Special Hurricane", which destroys all monsters on the field that were Special Summoned. "Armed Dragon LV7" is destroyed, and Jaden Summons "Elemental HERO Wildheart", who attacks directly, reducing Chazz to 2100 Life Points.

Chazz's brothers are angry that Chazz is losing, and question why he's not using the cards from the briefcase that they gave him. Chazz gets to feet and plays "The Graveyard in the Fourth DImension", which lets him return two monsters with "LV" in their names from his Graveyard to his Deck. He shuffles "Armed Dragon LV7" and "Armed Dragon LV7" back into his Deck. Chazz Summons another copy of "Armed Dragon LV3" in Defense Position and Sets a card to end his turn. Chazz stars up at his brothers, and Jaden realizes that the pressure that Chazz is under isn't from North Academy, but from his older brothers. Jaden tells Chazz that he shouldn't be Dueling to win, or Dueling under pressure, he should be Dueling for fun. Jaden attacks and destroys "Armed Dragon LV3" with "Wildheart" and Chazz activates his face-down "The Grave of Enkindling". This lets both players Special Summon one monster from their respective Graveyards in Defense Position. Chazz Summons "Armed Dragon LV5" and Jaden Summons "Hero Kid". Chazz questions when that card was sent to the Graveyard and Jaden responds that he discarded "Hero Kid" to activate "Special Hurricane". The effect of "Hero Kid" activates when he is Special Summoned, letting Jaden Special Summons two more copies from his Deck in Defense Position. Jaden Sets a card to end his turn. Chazz plays "Level Up!", which lets him Tribute "Armed Dragon LV5" to Special Summon "Armed Dragon LV7", ignoring the Summoning conditions. Chazz activates "Armed Changer", equipping it to "Armed Dragon LV7" by discarding an unspecified Equip Spell Card. When the equipped monster destroys a monster in battle, Chazz may add a card with less attack points than the destroyed monster from his Graveyard to his hand. "Armed Dragon LV7" attacks and destroys "Wildheart", leaving Jaden with 300 Life Points. "Armed Changer" lets Chazz add "Masked Dragon" from his Graveyard to his hand, which he discards via the effect of "Armed Dragon LV7", destroying all three "Hero Kids".

Chazz urges Jaden to surrender to prevent himself from being humiliated on the television broadcast. However, Jaden has been having fun in this School Duel the whole time and sees no reason to give up. Jaden is disappointed that Chazz is unable to have fun while Dueling him, and hopes that the next time they Duel, both of them can enjoy themselves. He activates "The Warrior Returning Alive", adding "Elemental HERO Avian" from his Graveyard to his hand. He then plays "Polymerization", fusing "Avian" with the "Elemental HERO Burstinatrix" in his hand to Fusion Summon "Elemental HERO Flame Wingman" in Attack Position. Chazz questions what the point was, as it can't defeat "Armed Dragon LV7". Jaden responds by activating his face-down "Miracle Kids", lets him target one monster, reducing its attack points by 400 for each "Hero Kid" in his Graveyard. With three, the ATK of "Armed Dragon LV7]]" drops to 1600. Realizing that Chazz will lose, the television crew cuts the broadcast. Jaden attacks, destroying "Armed Dragon LV7", with "Flame Wingman's" effect activating, inflicting damage to Chazz equal to his destroyed monster's attack points (As Chazz's life points fall from this attack, they are initially shown as 2700 but correctly fall to 1600. It should show 2100 before the attack).

Chazz's brothers chide him for losing, and question why he didn't use the rare cards they gave him. He responds that he wanted to win with his own Deck. Jagger lifts Chazz up by the collar of his uniform, and Jaden tells them both to stop. 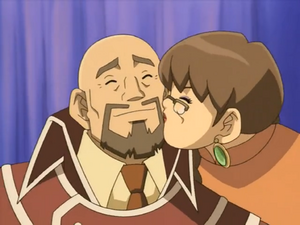 Jaden tells them that though Chazz lost the Duel, he won the fight against his brothers. Chazz feels like no one would believe he's a winner, but both the North and Central Academy student confirm this with his signature cheer. Slade and Jagger depart, and everyone meets at the submarine to see the North Academy students off. Chazz reveals he wishes to return to Duel Academy. Dr. Crowler announces that the prize will now be awarded, and its revealed to be a kiss from Ms. Dorothy for the Chancellor of the winning school. The sub departs, and Professor Banner informs Chazz that since he is technically transferring from North Academy, he must begin in the Slifer Red dorm, which Chazz is not happy about.

Jaden has 1600 Life Points remaining and controls one set card.

Turn 7: Chazz
Chazz has just attacked directly with "Armed Dragon LV7", but Jaden activates his face-down "Hero Spirit" to negate the attack as an Elemental Hero was destroyed this turn.

Turn 13: Chazz
Chazz draws. He then activates "Level Up!" to send "Armed Dragon LV5" to the Graveyard and Special Summon "Armed Dragon LV7" from his Deck (2800/1000) in Attack Position, ignoring the Summoning conditions. Chazz then activates "Armed Changer" to discard an Equip Spell Card and equip "Armed Changer" onto "Armed Dragon LV7". Now when the equipped monster destroys a monster in battle, Chazz may add a monster that has equal or less ATK than that of the equipped monster from his Graveyard to his hand.

"Armed Dragon LV7" attacks and destroys "Wildheart" (Jaden 1600 → 300). The second effect of "Armed Changer" activates, letting Chazz add "Masked Dragon" from his Graveyard to his hand. Chazz then activates the effect of "Armed Dragon LV7" to send "Masked Dragon" from his hand to the Graveyard and destroy all monsters on Jaden's side of the field.

Turn 14: Jaden
Jaden draws "The Warrior Returning Alive" and subsequently activates it to return "Elemental HERO Avian" from his Graveyard to his hand. Jaden then activates "Polymerization" to fuse "Avian" with "Elemental HERO Burstinatrix" in order to Fusion Summon "Elemental HERO Flame Wingman" (2100/1200) in Attack Position. Jaden then activates his face-down "Miracle Kids" to decrease the ATK of "Armed Dragon LV7" by 400 for each "Hero Kid" in Jaden's Graveyard until the End Phase. There are currently three ("Armed Dragon LV7": 2800 → 1600/1000). "Flame Wingman" attacks and destroys "Armed Dragon LV7" (Chazz 2100 → 1600). Since "Flame Wingman" destroyed a monster in battle and sent it to the Graveyard, its effect activates, inflicting damage to Chazz equal to the ATK of his destroyed monster (Chazz 1600 → 0).