"Duel Monsters Spirit Day", known as "School-Festival Duel! Blamagigirl Barges In" in the Japanese version, is the forty-second episode of the Yu-Gi-Oh! GX anime. It first aired in Japan on July 20, 2005 and in the United States on March 2, 2006.

The annual school festival has arrived, and each dorm puts on a celebration. A girl resembling "Dark Magician Girl" appears, and ends up Dueling Jaden.

A strange, yellow ball of light was floating around Duel Academy. Apparently, it was Duel Monsters Spirit Day, the day where students appreciate the Duel Spirits and dress up as their favorite monster. The yellow light was the spirit of the "Dark Magician Girl". She wanted to stop by the Academy and make Spirit Day a day the students will never forget. 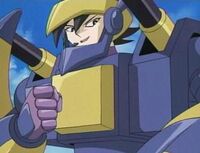 Meanwhile, all around the school, students were celebrating spirit day. Chumley and Syrus worked together to create a Duel arena outside of the Slifer Red dorm, for Syrus’ costume Duel. The remaining holders of the Spirit Keys meet outside the dorm to discuss what Atticus had said in regards to Professor Banner - he had been the one to instruct the students to go to the Abandoned Dorm. Banner had since disappeared, so they believe he is working for the Shadow Riders. Chazz comes up with the idea of using Banner's cat Pharaoh to find Banner, but is unable to locate him either. Having no other options, they agree to just attempt to enjoy Duel Monsters Spirit Day. Syrus attempts to find someone to dress up as "Dark Magician Girl" for the costume Duel.

Jaden is unable to decide on a costume, and instead combines pieces of several. He ultimately ends up a combination outfit that contains the parts of other costumes like the hat of "Saggi the Dark Clown", the body suit of "Breaker the Magical Warrior", the shoulder pads of "Celtic Guardian," and the shield of "Gearfried the Iron Knight".

They are approached by someone who appears to have a perfect "Dark Magician Girl" costume, and she agrees to Duel Jaden. After the Duel, everyone was curious as to who exactly was the Dark Magician Girl. Syrus figured it out that she was the spirit of Dark Magician Girl and hoped to see her again someday. That night, her spirit returned and gave Syrus a kiss before departing.

Turn 2: Jaden
Jaden draws "Elemental HERO Bubbleman" and subsequently Normal Summons it (800/1200) in Attack Position. Since "Bubbleman" was summoned while Jaden had no other cards on his side of the field, its second effect activates, allowing Jaden to draw two cards. Jaden then activates "Polymerization" to fuse "Bubbleman" with "Elemental HERO Burstinatrix" in order to Fusion Summon "Elemental HERO Steam Healer" (1800/1000) in Attack Position. "Steam Healer" attacks and destroys Dark Magician Girl's face-down monster, "Fire Sorcerer" (1000/1500).

Since "Fire Sorcerer" was flipped face-up, its Flip Effect activates, allowing Dark Magician Girl to remove from play two random cards ("Dark Magician Girl" and "Magician's Valkyria") in her hand and inflict 800 damage to Jaden (Jaden 4000 → 3200). Since "Steam Healer" destroyed a monster by battle and sent it to the Graveyard, its effect activates, increasing Jaden's Life Points by the ATK of the destroyed monster (Jaden 3200 → 4200).