"Magna Chum Laude", known as "Hayato VS Cronos! Ayers Rock Sunrise!" in the Japanese version, is the fiftieth episode of the Yu-Gi-Oh! GX anime. It first aired in Japan on September 14, 2005 and in the United States on April 4, 2006.

Chumley Huffington is offered a job as a card designer at Industrial Illusions, and must defeat Dr. Crowler in a Duel in order for Duel Academy to recommend him.

Promotion exams were just around the corner at Duel Academy. Jaden Yuki and Syrus Truesdale simulate a Duel against one another, and Syrus wins, with Jaden having a bad case of test anxiety. Syrus reveals that Chumley Huffington had been up all night preparing for the exams and that this is his last chance - if he fails again, he'll have to leave Duel Academy for good (in the Japanese version, he has failed his exams once, the English version changes this to twice). Later that day, the three sit in an art class, and Chumley has painted a picture of Ayers Rock in Australia. Dr. Crowler then appears on the classroom's monitor and tells Chumley to report to Chancellor Sheppard's office. Sheppard reveals that Chumley has won a card design contest hosted by Industrial Illusions with a design similiar to what he just painted in class. Sheppard reveals that the card has been made, and hands him "Ayers Rock Sunrise". Maximillion Pegasus appears on the monitor via a video phone call. He reveals that if Duel Academy is willing to recommend him, Pegasus will hire him on the spot as a card designer. 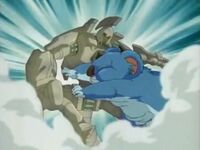 Sheppard is willing to recommend him, but Crowler does not agree, complaining that it would damage Duel Academy’s reputation due to Chumley’s low exam scores. He states he will, should Chumley be able to defeat him in a Duel during the promotion exams the next day. However, should he lose, he'll be expelled. Chumley is nervous, but As he explains his situation to Jaden that night, he’s reminded that no matter the result, he does enjoy Dueling, so he needs to do his best. Before the Duel, Crowler reminds him that he will not go easy on him. Chumley begins by Setting a monster. Crowler plays "Magnet Circle LV2" to Special Summon "Ancient Gear", with its effect activating, allowing him to Special Summon another "Ancient Gear" from his hand. He Tributes them both to Summon "Ancient Gear Golem". He attacks Chumley's Set monster, which is revealed to be "Des Koala". Though Chumley still takes piercing damage from the attack, "Des Koala's" Flip Effect activates, dealing 400 damage to Crowler for each card in his hand, something that impresses Syrus, due to Chumley having forgotten its effect before when Dueling his father. Chumley then Summons "Eucalyptus Mole" in Defense Position and Sets a card. Crowler attacks with "Ancient Gear Golem", again inflicting piercing damage. However, this activates "Eucalyptus Mole's" effect, letting Chumley Special Summon "Big Koala" from his Deck. Crowler Summons "Ancient Gear Soldier" in Defense Position and ends his turn. Chumley activates "Wild Nature's Release", adding the DEF of "Big Koala" to its ATK, giving it enough strength to destroy "Ancient Gear Golem" and reduce Crowler to 1500 Life Points. He then activates his face-down "Beast Soul Swap", returning "Big Koala" to his hand to Special Summon another Beast-type monster of the same Level. He chooses the same "Big Koala". In this way, he circumvents "Wild Nature's Release's" cost of the affected monster's destruction during the End Phase. This also lets "Big Koala" attack again, and Chumley destroys "Ancient Gear Soldier".

Crowler plays "Pot of Greed", drawing two cards. He then plays "Ancient Gear Factory", which lets him remove monsters in his Graveyard from play to Normal Summon an "Ancient Gear" monster from his hand without Tribute, so long as the removed monsters have double the Summoned monster's level. As a gigantic machine appears behind him, Crowler goes on to declare that he’s removing his two "Ancient Gears", "Ancient Gear Soldier" and "Ancient Gear Golem" to Summon another "Ancient Gear Golem". He attacks and destroys "Big Koala", with Chumley activating his face-down "Animal Trail" to add "Des Kangaroo" from his Deck to his hand. Crowler activates "Ancient Gear Drill", discarding a card to Set a Spell Card from his Deck. Chumley draws "Ayers Rock Sunrise" and recalls when he saw the real thing. After failing last year, Chumley had taken a trip to Australia with his father, though in exchange, he was supposed to give up Dueling. He decided to toss his Deck off of Ayers Rock. However, he could not bring himself to do so. Chumley activates the card he designed himself, letting him Special Summon "Big Koala" from his Graveyard and reduce the attack of "Ancient Gear Golem" to 2600 - 200 points for each Beast, Beast-Warrior and Winged Beast-type monsters in his Graveyard. He activates "Polymerization", fusing "Big Koala" with the "Des Kangaroo" in his hand to Fusion Summon "Master of Oz". He attacks, but Crowler counters with his face-down "Limiter Removal", doubling "Ancient Gear Golem's" attack and winning him the Duel. However, Crowler reveals that the point of the Duel was not to win or lose - but to test Chumley's improvements and growth as a Duelist. Having proven himself, Crowler agrees to offer his recommendation to Industrial Illusions.

Turn 1: Chumley
Chumley draws a monster and subsequently sets it.

"Ancient Gear Golem" attacks and destroys "Big Koala" (Chumley 1100 → 800). Since a monster Chumley controls was destroyed in battle, he activates his face-down "Animal Trail" to add "Des Kangaroo" from his Deck to his hand. Chumley's hand contains "Polymerization", an unknown Trap Card, "The Big March of Animals", and "Des Kangaroo". Crowler then activates "Ancient Gear Drill" to discard "Emes the Infinity" and set a Spell Card from his Deck, but that set card cannot be activated this turn.

Turn 7: Chumley
Chumley draws "Ayers Rock Sunrise" and subsequently activates it to Special Summon "Big Koala" (2700/2000) from his Graveyard and reduce the ATK of "Ancient Gear Golem" by 200 for each Beast, Beast-Warrior and Winged Beast-type monster in his Graveyard. There are currently two ("Ancient Gear Golem": 3000 → 2600/3000).

In the English version, Dr. Crowler is much more vindictive, and generally mocks any effort that Chumley makes until the end of the Duel, when he congratulates him on his improvements. In the Japanese version, Cronos admits when Hayato makes impressive moves and even contemplates losing by not activating "Limiter Removal".

The English version also cuts a series of flashbacks that Hayato has after his friends cheer him on.