"The Dark Scorpions", known as "Great Detective Thunder VS The Black Scorpion Grave-Robber Squad" in the Japanese version, is the thirty-ninth episode of the Yu-Gi-Oh! GX anime. It first aired in Japan on June 29, 2005 and in the US on February 26, 2006.

Chazz Duels the fourth of the Shadow Riders, the spirit of the "Don Zaloog" card, who leads the rest of the Dark Scorpions.

In a dark cave, a group of people remark that their boss in en route, and they vow to complete their task by adhering to the "Laws of Stealing", as they are the Dark Scorpions. As three of the seven Spirit Keys have already been lost to the Shadow Riders, Professor Banner calls for a professional police inspector. Upon finding out the everyone is keeping their keys on their person, he decides they should hide the keys in separate places, well away from each other. Chazz Princeton opts to hide his under the sink in his room, and the detective questions who the man outside is. Jaden Yuki responds that it's the janitor, Mr. Gorg. Jaden hides his in his deck drawer, and they find a boy named Chick eavesdropping outside. Syrus Truesdale walks by and remarks that Chick has a tendency to mix up which room is his.

Alexis Rhodes hides her key in her jewelery box, and one of the school's nurses, Meanae arrives, and the detective immediately suspects her as well. Banner places the final key in a safe located in the teacher's conference room, and they are interrupted by a security guard named Cliff, who the detective also suspects. That night, each of the keys is stolen. Despite this, any attempts to use the to open the Spirit Gate fail, and the thieves are unable to understand why. Upon discovering this, the group gathers in Chazz's room to discuss the situation, and the detective arrives as well, all of his "suspects" from earlier in tow. Chazz eventually deduces that the detective's "suspects" from earlier were all involved, as he left one of his Ojama cards in each hiding spot, and the spirits of them reported the culprits to him later. The rest of the card spirits contained in the cards in his room confirmed the culprit of the theft from his room. 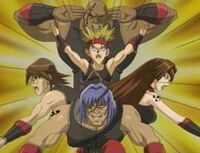 The detective reveals himself as Don Zaloog, while his "suspects" are the remainder of his criminal Dark Scorpion group. Zaloog states he had taken the job to steal the Spirit Keys years earlier, and had the rest of his group arrive at Duel Academy undercover until the time came. Chazz reveals that the reason the keys aren't working is that they must be won in a Duel. Chazz volunteers to Duel him, and Zaloog accepts. The Duel begins, with Zaloog playing "Golem Sentry" in Defense Position. Chazz activates "Fiend's Sanctuary" and Tributes the "Metal Fiend Token" Summoned through it to Summon "Armed Dragon LV5". It destroys "Golem Sentry" and evolves into "Armed Dragon LV7" during his End Phase. Zaloog combats this by Summoning himself (when he does so, he literally moves onto the field) and using "Mustering of the Dark Scorpions" to Summon the other four Dark Scorpions. Using "Dark Scorpion Combination", Zaloog deals 2000 damage to Chazz, inflicts a variety of negative effects to him and even returns "Dark Scorpion Combination" to his hand.

Chazz strikes back by using "Level Modulation" to Special Summon "Armed Dragon LV7". He uses its effect to discard "Despair from the Dark", destroying all of Zaloog's monsters. However, Zaloog saves them with "Retreat of the Dark Scorpions", returning them to his hand. Regardless, this leaves him open to a direct attack. Zaloog Summons himself again and attempts to use a second copy of "Mustering of the Dark Scorpions" to Summon the rest. Chazz activates his face-down "Ojama Trio", Summoning three "Ojama Tokens" to Zaloog's field. Thus, Zaloog can only Summon one more monster with "Mustering of the Dark Scorpions". He chooses "Dark Scorpion - Meanae the Thorn" and activates "Dark Scorpion - Tragedy of Love, Tributing her to destroy "Armed Dragon LV7". He is then able to attack directly, reducing Chazz to 600 Life Points and forcing Chazz to discard the final card in his hand - "Ojamagic". However, this is beneficial, as it allows him to add the three Ojamas to his hand. He fuses them using "Polymerization" to Fusion Summon "Ojama King" and then plays "Ojamuscle" to destroy the "Ojama Tokens" and increase "Ojama King's" attack to 3000. This is enough to defeat Zaloog, and he all of the Scorpions vanish upon defeat, leaving his Shadow Charm eyepatch behind, which was what granted the five Duel Spirits the ability to physically manifest in the human world. Chazz however is concerned about something.

Since Don Zaloog controls all five Dark Scorpions, he activates his face-down "Dark Scorpion Combination" to allow all of his monsters to attack directly once each this turn at the cost of allowing each monster to inflict only 400 battle damage. All five of Don Zaloog's monsters attack directly (Chazz 4000 → 3600 → 3200 → 2800 → 2400 → 2000).

Chazz then activates his face-down "Level Modulation" to Special Summon "Armed Dragon LV7" (2800/1000) from his Graveyard in Attack Position while ignoring the Summoning conditions, but in exchange Don Zaloog is allowed to draw two cards. Don Zaloog Sets two cards.

Don then activates "Dark Scorpion - Tragedy of Love" to Tribute "Meanae" and destroy all monsters Chazz controls. "Don Zaloog" attacks directly (Chazz 2000 → 600). The effect of Don Zaloog activates, forcing Chazz to discard "Ojamagic". Since "Ojamagic" was sent from Chazz's hand to the Graveyard, its effect activates, allowing Chazz to add "Ojama Green", "Ojama Black", and "Yellow" from his Deck to his hand.

Turn 6: Chazz
Chazz draws "Pot of Greed" and subsequently activates it to draw two cards (one of which is "Polymerization"). Chazz then activates "Polymerization" to fuse "Ojama Yellow", "Ojama Black", and "Ojama Green" together and Fusion Summon "Ojama King" (0/3000) in Attack Position.