"Judai VS Asuka! A Set Card Full of Hidden Feelings" is the one hundred and sixty-second episode of the Yu-Gi-Oh! GX anime. It first aired in Japan on November 21, 2007. The episode was never dubbed, but became available to the world with official subtitles via Crunchyroll on August 29, 2016.

The Tag Dueling tournament reaches its final match: Jaden and Alexis against Hassleberry and Blair. Jaden and Alexis still are not working well together, and Blair activates a card allowing them to switch partners. Alexis struggles with her decision on what to do when after graduating and with her feelings for Jaden, which the latter seems oblivious to.

The final Duel of the Tag Dueling tournament will be Jaden and Alexis from the senior block against Hassleberry and Blair from the junior block. Alexis comments that Jaden isn't enjoying Dueling as he used to. Jaden acts as if he hadn't noticed this, while Blair makes a last second adjustment to her Deck before the Duel begins. Alexis plans to Summon "Cyber Prima" but misses the timing to activate "Prima Light" during her opponent's turn. When Jaden's turn comes, he Tributes "Cyber Tutu" once again not checking Alexis' Set card, unraveling her plans further. Jaden realizes that Alexis was right - he doesn't really enjoy Dueling anymore, as his recent Duels have all been life-or-death. Jaden at first seems to make use of her card by using "Tag Request", however he then Tributes both his monster and Alexis's monster to summon "Elemental Hero Bladedge". Alexis then questions what he is doing as "Prima Light" is useless now. Jaden then activates "Hero Heart" to halve the ATK of "Bladedge" until the End Phase and allow it to attack twice this turn. He then has "Bladedge" attack the two tokens. Chazz and Syrus note that Jaden is doing a heartless move as he is inflicting Piercing Damage against two Defense Position tokens with 0 DEF.

After attacking and destroying Hassleberry and Blair's tokens, the latter reminds Jaden that this is an amazing duel. Jaden is touched by those words and notes he has never said his catchphrase for a long time. However his happiness is interrupted by Alexis who is angry at Jaden for his actions. Alexis notes she thought Jaden finally decided to cooperate, but she was foolish to think for even a second that Jaden would do that. Jaden is confused as he notes he used her monster too, but she explains she is talking about how he used it. She is now finally fed up with Jaden's actions since she believes he doesn't care about her feelings. Blair after hearing this realizes this is her chance. Alexis tells him go on without her, as he obviously doesn't need her win, since he took control of all the previous Duels without utilizing Alexis' cards or strategies. Blair activates her face-down "Partner Change", which allows her to switch sides with an opponent if they agree. Blair and Alexis switch partners. Hassleberry is disappointed that the concept of senior students against junior students is ruined, and Alexis angrily tells him they'll beat Jaden and Blair down until they can't get back up. Jaden notes to Blair they'll win the duel which greatly angers Alexis and she notes that Jaden seemed happy to end his partnership with her, but Jaden states it isn't like that. Jaden seems to work much better with Blair, checking and using her face-down cards rather than ignoring them. This angers Alexis greatly as Jaden did not even bother to check her face-downs. Jaden comments it's been a long time since he and Alexis last Dueled.

When Alexis activates "Doble Passe", Jaden comments that she used the same card during their first Duel, and that it was his first real impression of her. Alexis responds that she thought that he was an interesting guy. Jaden states he's glad he was able to meet her. Satisfied that Jaden now realizes how he's been acting, Alexis activates "Mystical Space Typhoon" to destroy Blair's "Partner Change", causing them to switch back. However, they seem to be in a hopeless situation after Hassleberry Summons "Super Conductor Tyranno" and Alexis' turn comes. Jaden tells her to check his Set cards. Using them, Alexis and Jaden win the Duel and the tournament. That night, as Jaden was about to return to his dormitory, he sees Alexis waiting for him. She tells Jaden she was glad to have met him, but it's heavily implied she wanted to confess that she had feelings for him. Jaden, oblivious to Alexis' emotions, thanks her for the Duel and smiles at her the way he used to. A tear fell down Alexis' cheek as she watches Jaden go back to the dormitory. 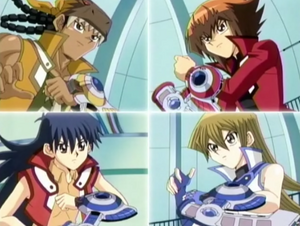 Jaden and Alexis VS Tyranno and Blair

Turn 2: Blair
Blair draws "Stray Lambs". Alexis intends for Blair to summon a powerful monster, but Blair activates "Stray Lambs" Special Summon two "Lamb Tokens" (0/0 each) in Defense Position. Alexis is about to activate her face-down "Prima Light", but Blair Sets a card and immediately goes to her End Phase.

Turn 3: Jaden
Jaden draws "Tag Request" and subsequently activates it to target "Cyber Tutu" and Special Summon "Elemental Hero Avian" (1000/1000) in Attack Position (since the ATK of "Avian" is the same as the ATK of "Cyber Tutu". He then Tributes "Cyber Tutu" and "Avian" in order to Tribute Summon "Elemental Hero Bladedge" (2600/1800) in Attack Position. Jaden then activates "Hero Heart" to halve the ATK of "Bladedge" ("Bladedge": 2600 → 1300/1800) and allow it to to attack twice this turn.

"Elemental Hero Bladedge" attacks and destroys both "Lamb Tokens". "Bladedge" then inflicts piercing damage twice to Hassleberry and Blair (Hassleberry/Blair 4000 → 2700 → 1400). At this point, Alexis becomes extremely angry at Jaden for his recent actions and refuses to continue participating as Jaden's partner. Blair, upon hearing this, activates her face-down "Partner Change", which will allow her to switch sides with one of her opponents if he or she agrees. She asks Alexis if she would switch sides and the latter agrees to switch, so Blair becomes Jaden's partner and Alexis becomes Hassleberry's partner. On Jaden's End Phase, the effect of "Hero Heart" expires ("Bladedge": 1300 → 2600/1800).

Hassleberry then discards "Destroyersaurus" in order to add "Jurassic World" from his Deck to his hand. He then activates "Jurassic World". Now while the latter card is face-up on the field, the ATK and DEF of all Dinosaur-type monsters will be increased by 300 ("Dark Tyranno": 2600 → 2900/1800). "Dark Tyranno" attacks and destroys "Bladedge" (Jaden/Blair 4000 → 3700). Hassleberry then sets a card.

Turn 6: Alexis
Alexis draws. She then Normal Summons "Etoile Cyber" (1200/1600) in Attack Position. "Etoile Cyber" and "Dark Tyranno" attack directly, but Blair activates her face-down "Scapegoat" to Special Summon four "Sheep Tokens" (0/0 each) in Defense Position. A replay occurs and Alexis uses "Etoile Cyber" to attack and destroy a "Sheep Token". "Dark Tyranno" then attacks directly via its own effect as all monsters Jaden and Blair control are in Defense Position (Jaden/Blair 3700 → 800). Alexis then Sets two cards.

"Grand Mole" attacks "Dark Tyranno" (Jaden intends to activate the effect of "Grand Mole" and return both battling monsters to their owner's hands without applying damage calculation), but Alexis activates her face-down "Doble Passe" to make the attack a direct attack (Hassleberry/Alexis 1400 → 500), and allow "Dark Tyranno" to attack directly this turn. "Dark Tyranno" attacks directly (Jaden/Blair 3200 → 300). After seeing Jaden having fun during a Duel like he used to, Alexis activates her face-down "Mystical Space Typhoon" to destroy Blair's "Partner Change". This forces Alexis and Blair to return to their original sides. Jaden then sets three cards.

Turn 9: Alexis
Alexis draws. She then activates Jaden's face-down "Limit Reverse" to revive "Cyber Tutu" (1000/800) in Attack Position. "Cyber Tutu" attacks directly via its own effect, but Hassleberry activates his face-down "Survival Instinct" to remove from play "Destroyersaurus" and "Dark Tyranno" from his Graveyard and gain 800 Life Points (400 for each Dinosaur-type monster removed this way) (Hassleberry/Blair 500 → 1300). The direct attack continues (Hassleberry/Blair 1300 → 300).