Kit Schrödinger, known as Schrödinger Nekoyama (シュレディンガー Nekoyama Shuredingā) in the Japanese version, is a character in the Yu-Gi-Oh! SEVENS anime. He works for Nail Saionji. 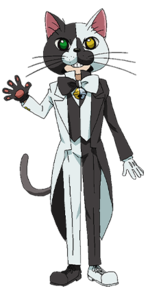 Kit dresses in black and white cat-themed magician's stage clothing; he wears an undershirt, long-tailed coat, and pants that are black on the left side and white on the right, and a waistcoat, oversized bowtie, and mascot cat head with reversed colors, though the nose of the cat head has black on the left and white on the right. He also wears a white glove with paw pads on the palms and fingers on his left hand and a large white shoe on his left foot, and black ones on his right side. His cat head's eyes are heterochromatic; the right eye is green and the left yellow, a possible reference to "Odd-Eyes Twin Tail Cat‎", and he also wears a black detachable cat tail and a stereotypical gold cat bell with the left side painted white.

As is befitting of his name, Kit believes in the Schrödinger's cat thought experiment; that multiple possibilities can exist, and this is reflected in his card effects and general attitude. He seizes on Luke's apparent discomfort for the guessing his card effects pose to him and continually mocks his chances, claiming that his possibility is the one that will come to pass. Kit behaves in a very catlike manner, often stretching on all fours and scratching a mat with his gloves after losing. When Luke conquers his strategy, Kit loses all his composed and panics, particularly after he loses and awaits Nail's punishment.

When he meets with Yuga Ohdo and his friends again at Goha Enterprises Kit is more polite and helpful, telling Gavin Sogetsu about the Dueling Insects Club and helping Luke look for them.

Kit tends to add the word "nya" to the end of his sentences, Japanese onomatopoeia for the sounds a cat makes, or add the word into normal words to make puns.

Kit was the first Duelist that Yuga Ohdo and his friends encountered in the Garden of Curiosity, startling them by using the shadow of his headpiece. He asked who would be the one to Duel him, and though Yuga was eager to volunteer, Lucidien "Luke" Kallister was the one to accept Kit's challenge. Kit took them to a room to Duel, beginning simply. Luke opposed Kit with two high-Level monsters, but to Kit's surprised pleasure, the challenge posed by his "Lost Cat" Trap Cards confounded Luke immensely, and Kit took advantage of that confusion to amplify it with his Schrödinger's cat philosophy. Thanks to Kit's Traps, Luke's attacks failed, and Kit Tribute Summoned "Odd-Eyes Twin Tail Cat‎" on his next turn and used it to retrieve a "Lost Cat", while once again stressing Luke out with his "Cat's Eye" Spell Card, allowing his "Cats" to attack directly and reduce Luke to 100 LP. However, Luke was finally able to snap out of his stress on his next turn and Summoned "Piercing Dragon Bunker Strike", which allowed him to draw and then return cards to the top of his Deck, allowing him to know which cards he'd have to guess when Kit used "Lost Cat". Kit panicked as Luke's "Multistrike Dragon Dragias" reduced him to 100 LP as well, but he decided to believe in the last possibility of his Trap and activated it when "Bunker Strike" attacked. To his glee, Luke had forgotten the order he'd returned his cards in, but he successfully guessed it correctly and his attack defeated Kit. As Kit panicked and begged Nail for forgiveness, Nail dropped him down a trapdoor.[2]

Kit, Buff Grimes and Seatbastian were tasked with examining the data of the Goha Rush Duel Team Battle Royal in Nail's haven to determine who was behind the tournament and the actions of Goha 66 and ordered to report to Nail if they found anything.[3] However they had little success due to their limited tech skills, but Tyler Getz and Toombs arrived to take over due to Tyler's hacking skills. As Tyler worked, Kit began pointing out sections of the data he had already checked until Toombs distracted him with scary stories.[4] Toombs and Grimes eventually began providing Tyler with calories to maintain his workload, while Kit held Tyler's phone for him as Roa called Tyler for updates while Yuga and Luke prepared to Duel. As the power began to fail as Tyler finally found what he was looking for; someone had been using the Goha Rush Duel Team Battle Royal to hack the Goha Duel Server to uninstall Rush Dueling, and Kit learned over the phone that the server was located on the moon.[5] The Heavy Cavalry Duel Club destroyed Otes' Relic, thought to be responsible for the hack, but Tyler confirmed the process couldn't be stopped. Although Rush Dueling was eventually uninstalled after Luke defeated Yuga, Yuga and Nail were able to reinstall it in the Super Rush Robot.[6]

Kit, Inukawa and Akumade went to the Goha Enterprises Main Office on a field trip, where they met with Yuga, Luke, Romin, Gavin, Swirly, Rayne and Rino, who now worked at Goha Enterprises, and Kit politely introduced his friends to the Goha #7 Elementary students. As Gavin showed them around the Goha Enterprises Main Office, they learned a group from their school had gone missing and Braun Honya noted it was likely the Dueling Insects Club, a claim Kit agreed with and he explained they were probably trying to cause trouble. Luke and Swirly decided to look for the Dueling Insects Club, and Kit, Inukawa and Akumade accompanied them. After splitting off from Swirly, they found Kabuto Bito and Kirihito Kamagaya outside Yuga's office, and Luke told Kit and his friends to stay back while he tried to catch Kabuto.[1]

Kit uses a Cat Deck, with his monsters being based on versions of "-Eyes Dragon" monsters in appearance and monster card type.

His playing style consists on having the opponent guess the type of card on top of their Deck, creating two possible outcomes - which reflects Kit's philosophy about the different possibilities that exist at the same time.