Venus Ganiko (ヴィーナス・ガニ子 Vīnasu Ganiko) is a character in the Yu-Gi-Oh! GO RUSH!! anime. She is the receptionist at the Coruffium. 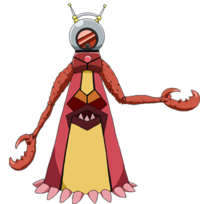 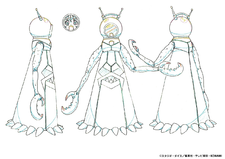 Lineart of Venus depicting her from different angles.

She wears a space helmet with two antennae over her head, and has two long crab arms ending in pincers. Her lower body is encased in a mechanical "dress" with lines connecting to form the rough shape of a face in the center, that sits upon a circle of stubby appendages.

Venus combines the appearances of two aliens originating from American science fiction cinema: the helmet of the Ro-Man from the 1953 film Robot Monster, and the Venusian Monster from the 1956 film It Conquered the World.

Yuhi Ohdo, Yuamu Ohdo and Yudias Velgear were looking for the receptionist of the Coruffium, to which Ganiko introduced herself. She asked Yuhi what kind of an alien he was, which he responded with being an Earthen alien. She told the group that anyone who wanted to Duel was welcome. She explained that winners in the Coruffium received Duel Power and many other items, then gave Yuhi a sign-up sheet. Once Yuhi signed the sheet, Ganiko told him to go to UFO #3 for his Duel. After Yuhi's Duel with Nomuratodamas, she threw Nomura out of the Coruffium for fighting.[1]