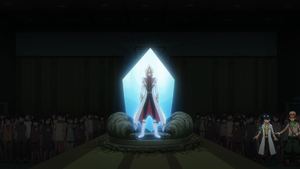 Otes being projected from the Relic in Big Seven Arena.

The Relic is a mysterious stone monument that appears in the Yu-Gi-Oh! SEVENS anime. It projects Otes, the Hologram Man, and is inscribed with the legend of the King of Duels.

The Relic is a throne-like object set on a circular dais. The crystal-shaped stone that forms the back of the "seat" glows blue when the Relic is active and projecting the image of Otes. When Otes Duels, the Relic rises even further out of the ground, revealing a column with the legend of the King of Duels inscribed on it;

"When the moon is full enough to be hardly recognizable, a Duelist will carve open a new path and guide the world as the King of Duels."

The Relic is capable of travelling between locations and leaving symbols carved in the ground though currently unknown means.

Otes first used the Relic to approached Goha Duel Overseer Nail Saionji and warn him that Dueling would soon evolve.[1] The Relic would then surface in an underground chamber in Goha City. It was discovered by Lucidien "Luke" Kallister and Roa Kassidy, both of whom desired to become the King of Duels, though Roa did not challenge Otes after seeing Luke do so. Luke failed to pass Otes's text six times and subsequently had his account banned, so Roa had his cousin Romin Kassidy whisper the legend of the King of Duels in his ear to turn him towards Yuga Ohdo. Luke brought Yuga to the chamber to install his Rush Dueling rules, and Yuga successfully used them to defeat Otes and install Rush Dueling.[2]

After Yuga defeated Otes and left the chamber, the Relic vanished from the chamber, leaving seven emblems behind that indicated the place where it would next appear, the Big Seven Arena.[3][4][5]

The Relic emerged in the Big Seven Arena on the next full moon, as had been deduced by Yuga, Roa, Professor Diggs, Kaseki Hotta, and Hunt Goto and projected Otes, who approved Yuga and Roa's Duel over the title of King of Duels. After the Duel, Otes told Yuga to find the key to a door to another world and the Relic retreated underground, resisting the efforts of Goha Enterprises to take possession of it.[5]

Otes would later emerge on the Relic to answer the call of Gavin Sogetsu, Romin and Luke, challenging them all to Rush Duels in exchange for a hint in defeating Nail's Maximum Summon.[6]

After Otes was imprisoned when he visited Goha Stadium, he used the Relic to escape underground.[7] Otes later apparently attempted to uninstall Rush Dueling using the Relic, which was found by the Heavy Cavalry Duel Club under Goha Stadium projecting status screens on the uninstallation.[8][9] Galian Townsend destroyed the Relic with his Heavy Cavalry GG03, but this failed to stop the installation.[9]

Otes later either repaired or replaced the Relic, as he used it to emerge in his chamber after being confronted by Yuga and Swirly after the Goha Rush Duel Team Battle Royal.[10]