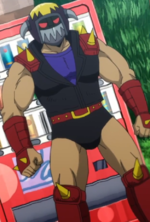 Good Max (グッドマックス, Guddomakkusu) is a series in the Yu-Gi-Oh! SEVENS anime. It is set in a post-apocalyptic world, starring a hero of the same name. Yosh Imimi is a great fan of the show.[1]

The show itself is a reference to Fist of the North Star.

In a post-apocalyptic world, the hero decided to transform himself to protect his sick mother. His catchphrase is "Good Luck", which he speaks in English.

Good Max himself is a tall, darker-skinned muscular man, wearing a black jacket with maroon shoulders tipped with golden spikes over a blue undershirt and black superhero-style shorts, maroon arm-guards with golden spikes on the backs of the hands and knee-high boots with golden knee spikes, a maroon belt with a golden buckle and holes, and a charcoal-colored helmet with silver horns, a yellow pattern on the top resembling an explosion, and a face mask with half-moon shaped red eyes and a mouth section designed to look like a jagged maw in two different shades of grey.