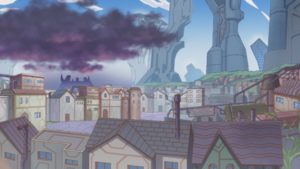 The Alien Residential Area at noon, with the dark side in the distance

The Alien Residential Area is a location in Yu-Gi-Oh! GO RUSH!!.

The Alien Residential area is located right under Mutsuba Town, accessible via train. It is an area where aliens that aren't imprisoned or deported by the MIK reside, which gave it a reputation of being extremely dangerous to humans. However, as Yudias Velgear, Yuamu Ohdo, and Yuhi Ohdo found out, even the Alien Residential Area has its own darker side that the regular denizens actively avoided, only leaving it to the worst of the worst aliens in the area.

Likely due to containing alien technologies that are inaccessible to most normal humans, the area shows instances of scientific wonders, such as a skyscreen machine that projects a realistic sky that changes according to the time of the day. The dark side of the area is, appropriately, perpetually covered in dark, gloomy thunder clouds.

Just like in many other places on Earth, Duelists can be found in the area. In particular, these Duelists weigh the worth of each other through a parameter called "Duel Power", measured through the possession of special items called the Rush Battler. Whenever a Duelist in possession of a Rush Battler wins against another, their Duel Power meter increases while the loser's decreases. Duelists with high Duel Power are generally more respected in the area, and thus can gain wealth and power more easily.