From Yugipedia
(Redirected from Cut)
Jump to: navigation, search
This article is about the action. For the song, see S H U F F L E. For the Tip Card, see Shuffling.

Shuffling (Japanese: シャッフル Shaffuru) is the act of randomizing a pile of cards in the Yu-Gi-Oh! Trading Card Game and Yu-Gi-Oh! Official Card Game. At the start of a Duel, both player's Decks must be shuffled before drawing their opening hands. The Deck must also be shuffled whenever a player searches it.

Some card effects can also shuffle other cards, such as shuffling a player's face-down monsters. However, players are not permitted to shuffle cards on the field unless directed to do so by a card effect.

Players are required by rule to shuffle their Main Deck at the following moments:

Many cards have an effect that shuffles a card into the Deck in the TCG. In the OCG, these effects often only specify that the card is returned to the Deck without mentioning shuffling, as the requirement to shuffle is implicit if the card is not explicitly returned to either the top or bottom of the Deck.

Shuffling piles other than the Deck[edit]

Usually, players only shuffle their Main Deck. However, some cards allow the player to shuffle other piles of cards.

The card "Cynet Storm" uniquely requires the Extra Deck to be shuffled, being the only card for which the order of cards in the Extra Deck is significant. 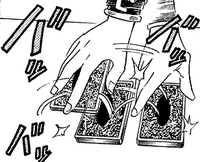 Deck cutting in the manga

In the Yu-Gi-Oh! manga, at the start of a Duel, each player shuffles their Deck, then allows their opponent to cut it.

In the Yu-Gi-Oh! anime and manga, when Yami Yugi and Arkana Dueled, Arkana used the "shotgun shuffle" method in preparation for the Duel, which Yugi noted as a highly discouraged style as it would bend and damage the player's cards. Seeing how Arkana had no qualms about damaging his own cards, this made Yugi realize that Arkana used the stripper technique, where Arkana trimmed the edges of his "Dark Magician" cards, so when Yugi cut Arkana's Deck he would inadvertently cut it at the point so that the "Dark Magician" would be on top of a small stack, ensuring that one of them would be at the top of the entire Deck.

Later, when Gansley used the effect of "Ashingray", he too used the shotgun shuffle, though at the time it was a virtual data deck, so no real cards would be damaged. Yami Marik also used this method during his Duel with Mai Valentine, but is later shown shuffling Yami Yugi's Deck normally.

In Yu-Gi-Oh! 5D's, Duel Disks and Wrist Dealers automatically shuffle the Decks contained within them, in addition to being capable of ejecting specific card from the Deck; these features were maintained for all subsequent series.

In Yu-Gi-Oh! ZEXAL, Scorch and Chills disable the auto-shuffle function of their Duel Disks for their Tag-Team Duel with Yuma Tsukumo and Shark to allow them to better coordinate their moves.

In Yu-Gi-Oh! ARC-V, removing the Deck from the Duel Disk actually cancels the current Duel.

InYu-Gi-Oh! VRAINS, shuffling is no longer animated but instead, the Deck glows and the the word "shuffling" appears on the side where the blade is projected from, though this is only seen in older models of Duel Disks which contain physical cards outside of LINK VRAINS.

In Yu-Gi-Oh! SEVENS, the Deck is shuffled inside the Duel Disk by being deposited further into the body, after which it resurfaces.