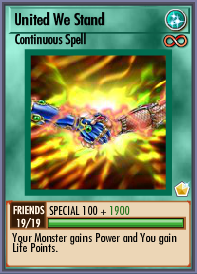 "United We Stand"; a Friendship Card

A Friendship Card is a type of card exclusive to Yu-Gi-Oh! BAM.

Each Friendship Card contains a fraction and a progress bar to show how much of the card's full power is unlocked. The green line is the progress bar, it starts off empty and increases depending on the number of friends the player has.