"Hydradrive", known as "Highdrive"[1] (ハイドライブ Haidoraibu) in Japan, also tentativelly called "High Drive"[2], is an archetype of Cyberse monsters of various Attributes (except LIGHT and DARK) used by Bohman and Harlin in the Yu-Gi-Oh! VRAINS anime. 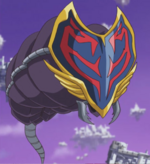 A "Hydradrive Token", bearing the archetype's sigil on its head.

Due to its namesake, many members of this archetype have a reptilian, snake-like look with most of the Main Deck and Link-1 monsters resembling animals like snakes or lizards. The archetype's Link-2 and Link-3 monsters feature a more humanoid design while their Link-4 monsters resemble the Naga, a semi-divine mythical creature that is half-human and half-snake in appearance. The Link-5 monsters are directly based on hydras.

The Japanese name of this archetype is a portmanteau of "high" (ハイ Hai), "hydra" (ハイドラ Haidora), and "drive" (ドライブ Doraibu). Fittingly, the Hydra is usually depicted as reptilian, explaining the design of most "Hydradrive" monsters.

"Hydradrive" plays around Link Summoning its Link Monsters, after which their strategy shifts to play around the opponent's monsters' Attributes. Most of the Link-1 Monsters share the effect to be able to attack directly if the opponent controls a monster with the same Attribute as itself, as well as Special Summoning a "Hydradrive Token" upon being destroyed, so to defend the player itself from being attacked directly and/or set up more Link Summons. Higher-Link monsters can negate the effects of monsters that share their Attributes, and can take on multiple Attributes themselves, in addition to manipulating the Attributes of monsters the opponent controls.