220 duelists showed up for the Las Vegas Yu-Gi-Oh! Shonen Jump TCG Championship on Sunday. They ranged in ages from young to old and from boys and girls to ladies and gentlemen. Some of the weekend’s competitors are local duelists from Las Vegas, while some made a trip here from California. Some duelists even came to this event from Missouri!

Out of the duelists, a mixture of new duelists and Yu-Gi-Oh! veterans entered this event for a chance to win an invitation to Nationals in 2005 and a copy of their very own Cyber-Stein card. It’s only the third one to be released in America, and it’s quite a prize, whether you treasure it as a trophy or end up selling it.

The environment at Vegas was strangely mixed, as a good deal of Lava Burn decks made an appearance. Decks based on Horus the Black Flame Dragon have been seen occasionally as well. Some bizarre yet effective decks also made an impression. Strike Fusion Tech, a deck utilizing many dark monsters including D. D. Scout Plane with Strike Ninja has been seen in a few numbers. Some players also brought some new and creative ideas to Las Vegas. 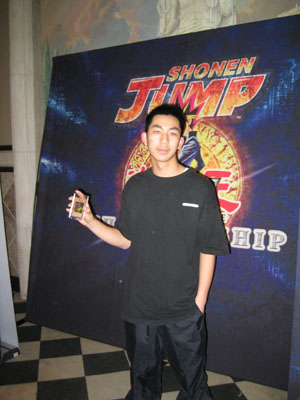