It’s over! The first West Coast Shonen Jump Championship of the format has drawn to a close, and Kyle Lopez is our newest champion!

Wielding a deck that could easily be called an evolved form of the one that took Ryan Spicer to the Finals table at Shonen Jump Championship Austin, Lopez defeated Kevin Wang in a quarterfinals mirror match that pitted Monarchs against Monarchs. Then he battled his way through four duels to defeat Joseph Zeng, the first duelist to ever take a Machine OTK with Overload Fusion and Chimeratech Overdragon to the Top 8 tables. A timely Ring of Destruction made this match the first ever to go to a fourth duel in a Shonen Jump Championship Top 8.

Finally, Lopez laid out Maurice Cariasco in a 2-0 match he utterly dominated. Key plays in both duels left Lopez with the upper hand, and a final strike with Spirit Reaper sealed the deal.

Like Austin before it, the range of strategies in the Top 8 was stunningly varied. While a Monarch deck took top honors again, and three Monarch builds were in competition, Day 2 also featured a pair of Beatdowns, a Warrior Toolbox, a Machine OTK (with Chimeratech Overdragon!) and a unique Prickle Fairy deck. Several trends were represented as being consistent across the nation: Hydrogeddon continues to be a formative card, and Apprentice Magician continues to see increased play at the top levels. However, regional quirks and new trends were also seen. Creature Swap saw a surprising (albeit slight) upswing in play, while Dimension Fusion and Return were barely present. In addition, double Asura Priest was incredibly popular as a means of shutting down Hydrogeddon, while also keeping cards like Cyber Dragon and Smashing Ground dead. The metagame certainly continues to evolve in new directions.

SJC Anaheim is just around the corner, and, with the national metagame now established, duelists can begin to prepare. For now our congratulations go out to Kyle Lopez, your newest Shonen Jump Champion! 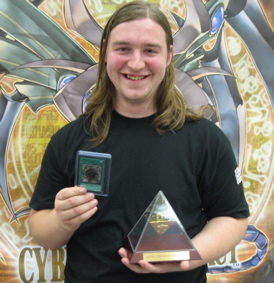