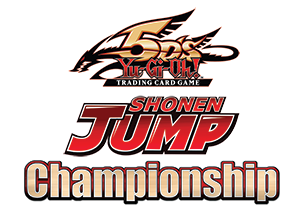 Uniquely, at the 50th Shonen Jump Championship, held from March 8–9, 2008 in Costa Mesa, California, United States, a total of five copies of the prize card "Doomcaliber Knight" were distributed: 1 copy for 1st, 2nd, 3rd, 4th places; and 1 copy for the winner of the side event. Additionally, 15 copies each of the previous 5 prize cards were distributed: The first place player received 1 regular copy of each of the five cards, as well as 1 copy of each encased inside a championship trophy. Of the remaining 5 copies (one of each prize card), the second, third and fourth placed players (based on Swiss record for third and fourth) each got to choose one of the cards (with second place choosing first, and so on); the remaining 2 copies were distributed to the two finalists for Best Side-Events Player, with the runner-up getting to choose their card first (due to the winner already getting "Doomcaliber Knight").[7]