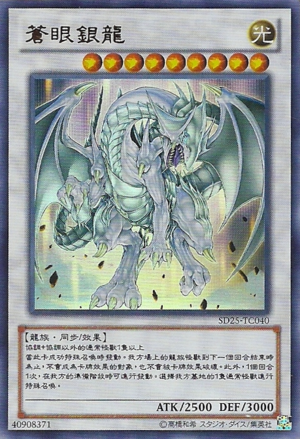 Traditional Chinese cards are Chinese cards printed with the Traditional set of Han characters. They were manufactured by Konami of Hong Kong, and were officially distributed in Asia from 2014, introduced in the Duel Starter Deck,[1] to March 2016, retired after Lord of the Tachyon Galaxy. This is the first printed language in which there is no form of text about the Attributes. Traditional Chinese cards are tournament-legal in Hong Kong, Malaysia, the Philippines, Singapore, Taiwan, and Thailand, alongside Japanese and Asian-English cards.[2] Their ID is TC.