From Yugipedia
Jump to: navigation, search
This article is about the series. For the card often referred to simply as "Sevens Road", see "Sevens Road Magician".

Sevens Road (セブンスロード Sebunsu Rōdo) is a series of DARK Spellcaster monsters, debuting in Starter Deck Yuga - Cut Through! Sevens Road!! and used by Yuga Ohdo and Otes in the Yu-Gi-Oh! SEVENS anime and Yuna Goha in the Yu-Gi-Oh! GO RUSH!! anime. The series is related to the Road Magic and Darkness series.

In the Yu-Gi-Oh! SEVENS anime, the Sevens Road series was developed by Otes at the Development Department of Goha Enterprises. The theme was based on the plot of the book SEVENS, in which the "Magician" travels the world looking for the other holders of the power of Seven, the Sevens, which make up the other monsters in the series.

Otes gave "Sevens Road Magician" to Yuga when Yuga was a child. In addition, Otes proclaimed that the Sevens Road monsters will be the road leading the owner to the throne of the King.[1] 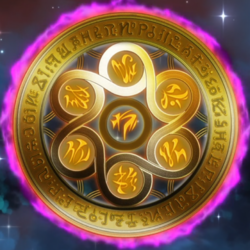 The Sevens Road sigil, seen in the background of each member's artwork

The main Sevens each have a different Level from 1 to 7. Each of the Sevens share the same background in a different color, matching the color of their clothing (except for "Magician" and "Witch", which wear black): a crest containing 7 rings, with each ring having a different symbol inside; each symbol corresponds to a different Seven (in clockwise order by decreasing Level), as seen in the appearance of "Master of Sevens Road" in the Yu-Gi-Oh! SEVENS anime.[2] Each of the Sevens also wears 7 rings somewhere on their body, and has their own cross-shaped magical symbol in the same color as the background of their art, which appears 7 times in their background; each of these symbols also appears in the artwork of "Master of Sevens Road", overlaying its corresponding ring from the sigil of each Seven's background.

When the monsters are sorted by Level, the colors arrange themselves to form the rainbow order, although offset by 2 (such that it begins with yellow, loops back to red after violet, and ends with orange). This order can also be seen in the rings hanging from the belt of "Master".

The main Sevens support DARK Spellcaster monsters, in particular the Level 7 "Sevens Road Magician"; each of their effects becomes stronger when "Sevens Road Magician" is in play. The main play of the series is to use "Sevens Road Witch" and "Magician" together, with "Warlock" and "Sorcerer" helping set up the pair; they can then be fused into the series's boss monster, the Fusion Monster "Master of Sevens Road", which becomes stronger for every DARK Spellcaster in the Graveyard with a different name.

Despite the focus on DARK Spellcasters, the Deck encourages also using Spellcasters of a variety of Attributes; "Magician" (and its other Fusion form, "Sevens Paladin the Magical Knight", as well as the Equip Spell "Road Arms - Sevens Lance") becomes stronger for every monster in the Graveyard with a different Attribute, and the related Road Magic Spells each require discarding a different Attribute of monster to activate.

As a Spellcaster theme, the Deck benefits from a variety of powerful generic Spellcaster support cards, most notably the Trap "Dark Revelation". "Accel Wonder Flare" and "Supra" can help set up the effects of the Road Magics more easily. The Legend Card "Dark Magician" is a Level 7 DARK Spellcaster, so it and its associated support cards work well with the support for "Sevens Road Magician".