This chapter serves as an epilogue to the manga's events.

Jaden Yuki and Koyo Hibiki face off for the finals of the "Duel World Tournament America". 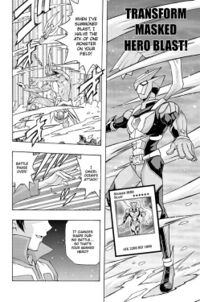 Koyo's turn
Koyo attacks "Gust" with "Ocean", but Jaden activates his Set "Mask Change", sending "Gust" to the Graveyard to Transformation Summon "Masked HERO Blast" (2200/1800); its effect activates, halving the ATK of "Ocean" (Note: the current ATK of "Ocean" is not shown; it is possible that its ATK was increased by a card effect previously). A replay occurs, and Koyo opts not to attack. Koyo activates "Polymerization", using "Elemental HERO Woodsman" in his hand and "Ocean" in his field to Fusion Summon "Elemental HERO Terra Firma" (2500/2000). He Sets a card.

Koyo's turn
Koyo activates "Miracle Fusion", banishing "Ocean" and "Woodsman" in his Graveyard to Fusion Summon "Elemental Hero Gaia" (2200/2600); its effect activates, halving the ATK of "Divine Wind" (2700 → 1350) and gaining the same amount of ATK (2200 → 3550). Koyo attacks "Divine Wind" with "Gaia", but Jaden activates his Set "Emergency Bulkhead", which prevents the destruction of "Divine Wind" and makes Koyo only be able to attack with one monster this turn (Jaden 3000 → 800). Koyo Sets a card. During the End Phase, the ATKs of "Gaia" and "Divine Wind" return to their original values.

Koyo's turn
Koyo attacks and destroys "Divine Wind" with "Core", with the effect of "Core" doubling its ATK during the battle (2700 → 5400); Jaden activates his Set "Residual Reflection", reducing all damage he takes this turn to 0. The second effect of "Core" activates, destroying "Koga" and "Shadow Demon".