Kaiba has 2000 Life Points remaining and controls "Obelisk the Tormentor" (4000/4000) in Attack Position and "Spell Sanctuary". 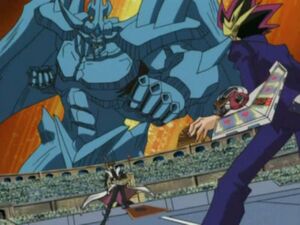 Kaiba draws. Yami Yugi then activates his face-down "Card Destruction" to force both players to discard their hands and draw the same amount of cards they discarded. Yami Yugi then activates his face-down "Disgraceful Charity" to allow both players to add all cards discarded this turn back to their hands ("Slifer the Sky Dragon": 3000 → 6000/3000 → 6000).

Kaiba then activates the second effect of "Obelisk the Tormentor" to destroy all of Yami Yugi's monsters by Tributing "Blade Knight" and "Sword of Soul". While "Slifer the Sky Dragon" isn't destroyed, the second effect of "Obelisk the Tormentor" proceeds in inflicting 4000 damage to Yami Yugi, but Yami Yugi discards "Kuriboh" to make the damage he would take 0 ("Slifer the Sky Dragon": 6000 → 5000/6000 → 5000). Kaiba Sets a card. 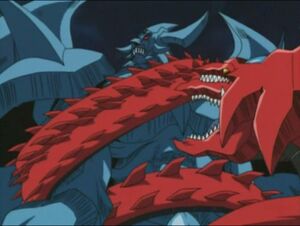 Due to the second effect of "Necromancy", Kaiba's monsters lose 600 ATK for each "Necromancy"-summoned monster that was destroyed until the End Phase ("Obelisk the Tormentor": 4000 → 1600/4000). Since "Sword of Soul" was destroyed and sent to the Graveyard, its effect activates, allowing Kaiba to increase Obelisk's ATK by 1000 ("Obelisk the Tormentor": 1600 → 2600/4000). Yugi activates the effect of "Electromagnetic Turtle" from his Graveyard to immediately end the Battle Phase.