Tsukiko Kuroda ( Kuroda Tsukiko), nicknamed Light Tsukiko (ライト Raito Tsukiko), is a character in the Yu-Gi-Oh! OCG Structures manga. She is known as one of the Four Duel Kings, and is known to have a terrifying side that belies her usual polite personality. She also carries a Potan bag that changes moods as she does.

Tsukiko, along with her older brother Yami, is a frequent visitor of the Satellite Shop. One day while there, she was challenged by another Duelist named Shoma Yusa. Her brother, however, saw this as a vulgar advance on his little sister, and, being the sort of over-the-top person he is, challenged Shoma instead to "defend" Tsukiko. Tsukiko was annoyed, but allowed it to happen. She watched the Duel take place alongside Jukyu Goriki, and was impressed when Shoma not only held his own, but won the Duel altogether.

Later, she and Shoma were set to finally play their own Duel, using Shoma's newly-built Deck following the release of Structure Deck R: Warriors' Strike. However, before they could begin, Shoma was suddenly challenged instead by Saiko Tendo, the fourth of the Duel Kings, who wanted to test his Deck against the one who defeated Dark Kuroda in preparation for the National Qualifiers for the World Championships. Tsukiko was, again, very annoyed by the interruption; however, she recognized that this tournament meant something special to Tendo, and promised Shoma that they'd play another day. Tendo eventually won, but Tsukiko, not caring about Tournaments, didn't go to the Qualifiers to cheer him on.

A week later, rather than risk something other thing to interrupt them again, Tsukiko invited Shoma out to a Duel Date away from the Satellite Shop, in an empty parking lot where there were no random passersby or nosy older siblings. Their Duel finally began, and Tsukiko quickly realized that Shoma had rebuilt his "God Phoenix" Deck from scratch since his Duel with Tendo, as she expected of him. Before she could begin her own turn, her own brother appeared, despite her never mentioning where she was or what she was doing. Opening her Potan bag revealed that her brother, overprotective and detached from reality as he is, had decided to put a GPS tracker in her bag for just such a situation. 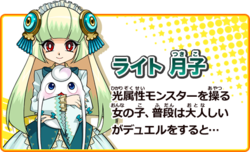 Her aura grew dark quickly, and she soon had her brother put back in line through sheer force of will, telling him to stop interrupting her date with Shoma (Shoma, of course, being unaware that this was a date, not just a Duel). Tsukiko continued the Duel, and using the power of her "Herald" cards, soon put Shoma into a corner. However, she was distracted for too long on all the ways she would inevitably win that she failed to notice how quickly she had run out of resources to stop Shoma from counterattacking. Sure enough, Shoma used his newly built Deck to clear Tsukiko's "Herald" monsters from the field and reduce her LP to 0, winning him the Duel.

Shoma approached Tsukiko with hand outstretched, complimenting her on a great Duel and thanking her for inviting him out that day. However, rather than shake his hand, she instead pulled Shoma into a tight hug and told him that the next one should be a proper date instead. Shoma, having a one-track mind, replied that he'll be happy to Duel again soon. Tsukiko was left speechless at that, but still smiled and said he was a strong Duelist, at least.

Later on, Shoma asks Tsukiko to join his team for the Team Battle event at the Satellite Shop where she declines because she has joined Kuroda and Tendo's team; Team Light and Darkness, the Two Sides of A Same Coin. During her duel with Anna Des, she grows immensely jealous as Shoma delivers consistent compliments to Des and her actions, ignoring the warnings from Jukyu to calm down. These cheers send Tsukiko into a rage and she defeats Des. Her team does not win in the end, however, due to Tendo and Kuroda losing their duels against Shoma and Jukyu respectively.

Some time after the event, Tsukiko goes on a "date" with Shoma and ends up dueling Shoma's sister, Ageha Yusa

Tsukiko first uses a "Herald" Deck filled with all manner of Fairy monsters, including various "Timelord" monsters, which she uses for their strong negation abilities to prevent her opponent from counterattacking.

Tsukiko next uses a "Jinzo" Deck focused on stunning Trap Cards, though this strategy is avoided due to Des's "Darklord" deck being able to use their Trap effects from the GY.

During her Duel against Ageha, Tsukiko borrows one of Shoma's Decks, using an "Amazement" Deck.

During her Duel against Shiori Motokariya, Tsukiko uses a "Naturia" Deck.